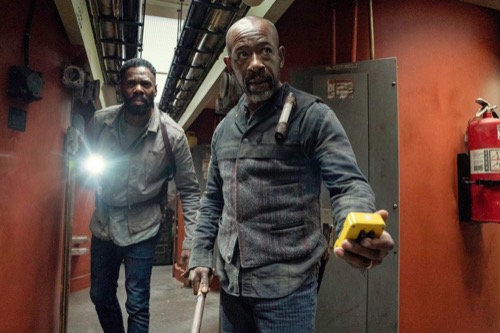 On AMC tonight Fear The Walking Dead (FTWD) airs with an all-new Sunday, June 6, 2021, episode and we have your Fear The Walking Dead Recap below! On tonight’s FTWD season 6 episode 15 called, “USS Pennsylvania,” as per the AMC synopsis, “In a race against time to stop Teddy’s plan, motives are revealed and convictions are tested as Morgan and his allies infiltrate and make their way through the beached submarine that holds the tools for Teddy’s destruction..”

In tonight’s FTWD episode, the episode begins with Morgan walking through Morganville with half-ruined buildings. We hear Teddy, speaking to Dakota, she says her mom did the same thing as Morgan ten times over and she never felt comfortable in her own skin. Teddy tells her that she just wants someone to love her the way she is. Dakota asks if she can find that person in his new world. She mentions Alicia, she means something special to him and he put her in the bunker.

He tells her that she is just like him and he loves her. She asks him what is going to happen to them, he says they are going to die with everyone else. He asks her if she wants to pretend to be someone else or stay the way she is for whatever time they have left. She says she wants to be who she is. Riley comes into the area of the submarine, the USS Pennsylvania, where they are. Teddy has the keys to launch the nuclear missiles from the submarine and the reason he knows what to do, Riley was a weapons officer on the submarine before the world ending as they knew it.

Morgan and about a dozen people; a lot of familiar faces arrive at the submarine. They head up on top, Morgan opens the hatch and says it is a lot further down than he thought. Morgan goes down first, June tells him that she has his back. All of a sudden, Morgan is attacked by a walker. He shouts to June to shoot him, she’s got a good shot; Morgan thanks her for saving his life. Morgan tells her the crew must be all dead down there. Morgan is inside and down, Grace follows, then another six or seven follow him down. Morgan doesn’t want Grace with him, he tells her that he may not come out alive and he wants her to be able to build a future.

June wants to take a look to see if Morgan is hurt, but he won’t let her. Strand and Dwight are down as well with a few others. They start walking through the submarine, Grace returns to the ladder, she radios Lucy who can’t hear her. Room by room they are going through the sub, Grace heads out to speak to Lucy, she tells her that there were 150 crewmembers. The crew head to the missile command room. Strange how they only got to see one walker so far.

Morgan wants to go through the rest alone, nobody will let him, they are all going forward with him. Morgan opens a hatch door, inside you can hear the walkers, Morgan gets into a kill or be killed mode. Once clear, he tells the rest to come through. They are in the room with the missiles, Dwight says you could take out a continent with what is inside.

There are more walkers, you can hear them outside. There is a radio inside the room, Teddy radios in and speaks to Morgan. Officer Dorie takes the mic and lets Teddy know that he is there and he has a bullet left that he plans on putting in his head. Teddy tells him that Alicia is tucked away where they won’t find them. Morgan tells Grace to have Lucy move everyone away from the sub when Teddy reveals that he is about to send everyone to their maker.

Someone is knocking, Strand and Morgan go to investigate. Morgan kills a few more walkers while he is trying to open another hatch. Strand sees Morgan going through a hatch and he tells him to let him through. The two are together, Strand tells him that he doesn’t need to do this alone. Morgan says he wants to make sure that these people are following him because he is leading them to something better. They arrive at another hatch, they have a reader and the readings are very high outside the hatch. They hear a noise, Morgan calls Grace and tells her the next room is off the charts. She says a reading like that would have to be from exposed radioactive material.

Strand climbs a ladder to go up a hatch, Morgan follows. In this new area, there are more undead and more hatches. Morgan tells Strand that they have hit a dead end. Strand tries to grab Morgan’s stick and throws him to the ground and makes him zombie bait, then runs away like a coward.

Dakota shows up, she pulls a gun on Strand and he tells her not to make the same mistake she made with John Dorie. Morgan didn’t get eaten by walkers, he escaped and he saves Strand just as Dakota is about to kill him. Dakota is knocked out.
Morgan radios Grace and tells her that he is alright, and this ends now. Morgan turns to Strand and tells him that he will deal with what he did later, they already lost enough time.

Riley and Teddy are getting ready, he calls Sue and she doesn’t answer. All of a sudden, Teddy sees a red light and alarm go off, it is Morgan and Strand outside the hatch where they are. Morgan has access cards and he is trying one after the other until he gains entrance. It’s too late, a missile has been launched and they can’t stop it. There are ten warheads on the missile.

In the end, Strand tells Morgan that he left him for the dead to save lives. And surprisingly, neither kill Teddy or Riley nor take them, prisoner.