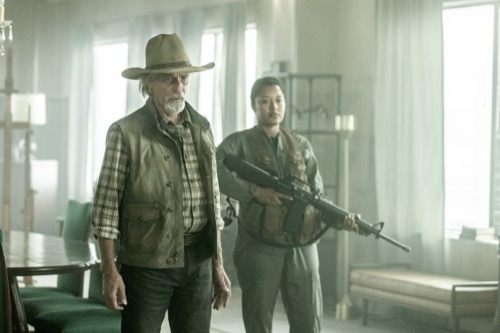 On AMC tonight Fear The Walking Dead (FTWD) airs with an all-new Sunday, November 28, 2021, episode and we have your Fear The Walking Dead Recap below! On tonight’s FTWD season 7 episode 7 called, “The Portrait,” as per the AMC synopsis, “When baby Mo gets sick, Morgan successfully pleads for entry into Strand’s Tower; Morgan quickly learns even Strand’s benevolence has its limits.”

Juliana paints Victor’s portrait. He wants people to see this in 1000 years. He gets several calls for intakes. He denies them as he drinks scotch. Day after day he continues to sit for his portrait as he denies everyone from joining his community. Morgan arrives with the baby. He wants to see June. Victor tells him to take a hike. When he sees his portrait he becomes upset and tells his people no-one sees him for who he is. He tells them to let Morgan in.

Morgan tells Victor he had no choice but to come. Morgan heads to see June. Morgan asks June if she is happy. He is working on a better situation. She could come with him. She wants nothing to do with Virginia.

Morgan meets with Victor for a few days. He will be staying so his baby get get antibiotics. Morgan knows he is trying to rub his face in his success and the community. Just then, a walker is rocketed through the window. Victor kicks the walker out. His people come to tell him the Stalkers are here. Victor takes a call from one of the leaders. He threatens Victor. He wants their community and he has a war head. He can also catapult a contaminated walker at them. wants Dorie ASAP. Morgan wants to help. Victor tells him now before collapsing and choking. They call June.

Victor is struggling. He vomits. He has been poisoned. June tells him he may or may not die. The leader outside launches a walker, warning them not to do anything funny. Victor takes Morgan’s advice on calling the armory. Floors below are hit by a walker. After the can’t call the armory, Victor tells them he will go to the armory. He cannot trust any of them. He tells Morgan he is coming with him but he will hold his baby.

Victor can hardly walk. Morgan volunteers to take a rope down the elevator shaft. After Morgan makes it down he demands Victor lower his daughter down. Victor agrees after some pushing by Morgan. As he lowers the baby, he tells Morgan how he cannot trust people. Morgan tells him he needs to try. After Morgan gets the baby, Victor tells him he knows he wont be back. He asks Morgan to look for Alicia. He knows she doesn’t want him to look for her. Morgan tells him he will be back.

Later, Victor comes to. Morgan and June are with him. Morgan tells him Sarah and Grace got rid of the enemy. June tells Victor he should be all right. She leaves. Morgan and Victor talk about finding Alicia and making a community where she would want to live in. Victor sees Morgan’s thumb, it is blue like the poison. He knows it was him. Morgan finally admits it.

Victor and his men bring Morgan to the roof. They plan to throw him over and into the walkers surrounding the walls. Just then, Grace calls from the outside. She will come in and help and also get rid of the contaminated walkers if he doesn’t kill Morgan. Victor agrees. But if she comes in, she cannot just leave.

Later, Morgan tells his assistant he now likes his portrait and also wants to spend time with the baby. He is her new dad after all. Out in the night, Morgan comes face to face with Dwight and Sherry. They bring him to meet their new leader. Its Alicia. They hug. She needs his help. Her people are tired. Just then walkers approach. People shoot. Morgan yells no. A red smog dispenses. He tells them to run.