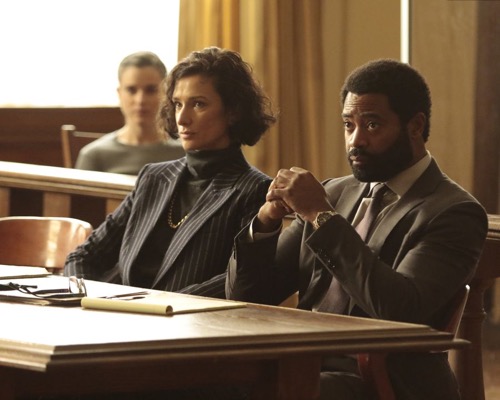 Tonight on ABC their new legal drama For Life inspired by the life of Isaac Wright Jr. airs with an all-new Wednesday, February 24, 2021, episode, and we have your All Life recap below.  On tonight’s For Life season 2 episode 10 “Andy Josiah” as per the ABC synopsis, “Aaron and his legal team face their toughest trial yet as they prosecute the police officer responsible for the killing of an innocent, unarmed Black man.“

In tonight’s For Life, finale episode we see a video where former inmates are speaking on behalf of Aaron Wallace and they say there are 354 of them, former Bellmore inmates that wouldn’t be out of there if it wasn’t for him.

The trial of officer Edward Linsley begins, the trial is being live-streamed. Aaron is up a fist, he says a man went to buy his wife ice cream, they just had a baby, he grabs his car keys, his seven-year-old son begs to go with him.

They head off on their adventure, the corner store, they are on their way home. The boy forgot his favorite toy at the store, so they head back. Two minutes later the man is pulled over, six minutes later he shot in the back unarmed, with no criminal record. That man’s name was Andy Josiah.

Officer Matragna is on the stand, he says when lieutenant Diaz, when he arrived on the scene, told him to change everything for the report. They want to show a video that Sherwin Maloof took, he is in Iran, he has a sick family there and couldn’t be in court. The defense say that they have text messages between Maloof and Safiya Masry, in one of their recent text, she gave him permission to go. The defense says that Masry told the witness to flee, so they shouldn’t use the video, the judge agrees.

Aaron questions Matranga, he says he was nervous, he thought the situation was going to escalate because Linsley has used force before when he has been amped up. Matranga says he was amped up because of the protests. The defence asks Matranga how long he has worked with Linsley, he says two years, she then asks if he reported him ever, he says no.

Aaron, Henry and Safiya are talking about the case, Aaron says they should try to find something in Linsley’s past. Henry says they should leak the video to the press, then the jury will see it. Henry then tells him to put Marcel on the stand, Aaron is frustrated.

Henry and Aaron go out in the hall, a man comes around the corner and calls Arron’s name, then he says “blue lives matter,” and he shoots Henry.

Aaron tells Safiya that Henry stepped in front of him, he took a bullet for him.

Aaron finds out the guy who shot Henry has been arrested, his name is Mark Boswell, and has no connection to the police. He drove all the way up from Virginia because of internet chatter.

The next day, Marco Diaz is called to the witness stand. Safiya asks him questions, Diaz says he was there to collect information from the scene. Although nobody was there so he didn’t ask anyone any questions. Although Safiya shows a video of him entering a place and speaking to Mr. Maloof about the shooting, and the man handed him over a flash drive. Diaz says he wants the advice of counsel, he pleads the fifth.

Diaz was attacked and he was warned to lay off Aaron, he says the guys had Russian accents. He is not going to report it because it will escalate everything. Aaron says this is getting out of control.

On to closing arguments and then the verdict. As for the first count of the indictment, manslaughter in the first degree, not guilty. On the second count of the indictment, charging criminally negligent homicide, guilty. It’s something, but Aaron says it is a slap on the wrist. Before the judge issues sentence, Mrs. Josiah would like to say something, “the jury has decided that has happened to my husband was an accident.

Like when a car company makes faulty brakes. When there’s an accident, we want to forgive people, to give them another chance. My husband is not going to get another chance because that accident happened with a gun in the hands of a man with

all the power. Now the way I see it when you take a job where you have that kind of power, you gotta be more careful. That means that before you get out of your car to ask someone about a cell phone or a u-turn, you gotta think about the fact that is somebody’s father, somebody’s husband, somebody’s son that you are going to be talking to. If you can’t handle that, if all that makes you too scared, then there are lots of other jobs you can do without a gun.

Because we can’t have any more accidents like this. The night our son was born, Andy wrote a letter to him and I would like to read it.” “Dear Marcel, you were just born, I held you in my arms for the first time tonight. You are so small, you’re entire body almost fits in my hand. I hope you will grow healthy and strong, and I admit, part of me wants you to stay this small so I can always protect you. I hope so much for you

Marcel that you are happy and healthy. I hope you are never afraid and that you can tell me anything. I hope that you are quick to forgive and slow to anger. I hope you do what you love and when you fall in love, it is as special as me and your mom have. Know that I love you, you have made me the happiest man on earth and I will always be there for you, your dad.”

She ends it by saying, “to protect and serve, that is what you were supposed to do.”

The judge sentences Diaz to the maximum amount allowed by law, four years in state prison.

Aaron and Safiya go to see Henry and update him on the case, he is doing better. Henry asks Aaron if they are going to start a firm and become official. Aaron thanks Henry for what he did in the hallway. Henry says he did it because he loves him.

Jamal is the next case Aaron will be working on.