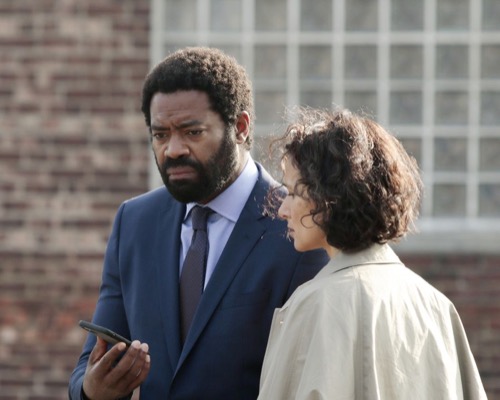 Tonight on ABC their new legal drama For Life inspired by the life of Isaac Wright Jr. airs with an all-new Wednesday, February 10, 2021, episode, and we have your All Life recap below.  On tonight’s For Life season 2 episode 8 “”For The People” as per the ABC synopsis, “Aaron faces pressure from all sides when he is forced to decide which charges to bring against the officers responsible for the killing of an unarmed civilian.

While Safiya pursues video evidence that could change their case, Roswell searches for a way to move the case from Staten Island to a friendlier venue.”

In tonight’s episode, Aaron Wallace was appointed as Special Prosecutor of the Andy Josiah case. Attorney General Burke made this appointment after it was pointed out to him that if he did so that it would be a win with the black community and it would appear as if he was impartial.

The truth however is that Burke knew this case wasn’t going anywhere. It was being tried in Staten Island and Aaron was still a new lawyer. It would therefore be Aaron’s name that gets tarnished once this case went down in flames. Burke was fine with that because he can still claim he tried to help and real help would have been someone more experienced. Thankfully, Aaron wasn’t doing this alone. He did have people he could rely on. He asked Safiya to join his team and she plus Roswell on his side will do more for this case than Burke ever did.

The first step will be evidence. The team that Aaron put together had visited the place where Andy was pulled over and there was a security camera nearby. The owner of the store knew Andy. He knew him by name because Andy was one of the few people to come in anymore what with the pandemic and so you would think the store owner would be willing to help. But he wasn’t. He claimed his security cameras weren’t working that night when the truth is the cops probably asked him to erase it or they erased it themselves. There was also the community to contend with. The store owner didn’t want to say anything because the community there is largely pro-police and they were the potential jurors on the case.

Aaron met someone who couldn’t wait to be on the jury because he wouldn’t exonerate the police. The same police that didn’t fill out an official report on what happened and who wasn’t interviewed or investigated after they discharged their weapon. It was apparently policy that the officers aren’t questioned for the first forty-eight hours because they might be traumatized. Everyone and the mother knew the officers involved in this case weren’t traumatized.

They took this additional time to get their stories straight and they leaned on people like a store owner to hide the video of their crimes. When the truth is that two officers killed an unarmed black man. They shot him in the back and he later died from his injuries. One officer committed the crime while his partner was covering up for him.

Safiya developed a rapport with the store owner. She convinced Mr. Sherwin that he had to do something or else a good man’s murder was going to walk. She must have said the right thing because Sherwin later changed his mind. He handed over a video of the shooting and it was worse than either Safiya or Aaron thought it would be. The video showed that the officers pointed a gun at Andy’s son Marcel. Marcel was a little boy.

He was in his car seat and they still pointed guns at him. It wasn’t even both of the officers that were the problem. One of the officers went to his car to run the license plate and the other just happened to be Officer Edgar Lindsey. Lindsey was the one who dragged Andy out of his car. It was Lindsey who shot an unarmed man and everyone was just covering for him.

Then there was a problem of location. Aaron and his team knew they could never win a trial like this in Staten Island and so Roswell suggested something drastic. He suggested that they charge the officers with a lower charge then they asked to be moved to a different borough. Once they were in a different borough, they would reconvene a new grand jury and they would go after greater charges.

The toughest part in doing this would be getting the judge to okay the transfer. Roswell again suggested that they approach the judge in what the judge thought was a backroom deal. Safiya didn’t like that suggestion because she didn’t think playing with a judge would go well and the guys disagreed. They did a backroom deal with the judge. They went after the lesser charge.

They got the lesser charge. The judge agreed to it and he later asked happily surprised in court. The judge also released the officers on their own recognizance. The black community began believing that Aaron was a sellout and they turned on him. His daughter Jasmine even had to shut down her father’s website because the abuse was so vile. She didn’t know the truth and neither did her boyfriend Ronnie.

Ronnie has been struggling since his arrest. He doesn’t understand why he was roughed up or why the cop automatically assumed he was in the wrong. Marie suggested that Ronnie speak with the officer. They later met with him at the precinct and they asked him why did he think Ronnie was the enemy.

The officer refused to say. He claimed he couldn’t talk about an open case and so instead the two confronted him. They made sure to tell him that he picked on the wrong kid. Ronnie has a bright future and nothing that the officer did was going to take it away. The two said what they had to say and they left.

Ronnie did his best to put the past behind him and he came to see that Aaron was up to something. Aaron got the case transferred to Queens. They got a new judge and they upped the charges. Only the defense suspected something was coming. Officer Lindsey got a new hotshot lawyer who was both black and a woman. And she fought against the new murder charges, only she couldn’t get the judge to drop the manslaughter charge.

The judge also asked to speak with Aaron alone. She didn’t discuss the case though she did warn Aaron that what happened to Maskins didn’t happen all at once. It happened over time. Maskins started out by cutting corners and he became the power-hungry monster. The judge brought this up because she didn’t want that to happen to Aaron. He shouldn’t be playing fast and loose with the law.

After Aaron brought more serious charges against the police officers, began saying that he only did so because he felt pressured and Andy’s widow also heard that this was Aaron’s plan all along. She apologized to him for ever doubting him. She has just gotten so upset because the media was already painting Andy out as if he was some gangster and they even pulled a photo from ten years ago to match.

The photo was misleading. So, the widow gave Aaron footage of who Andy really was to remind him why he’s fighting now. She also said that Officer Lindsey’s partner came by her house and he expressed regret at her husband’s passing. She had thought it was odd. She even thought he was making fun of her but Aaron said that could be a sign that something was happening behind the scenes.

And later the NYPD arrested Sherwin the store owner, they didn’t tell him what the charges were and Safiya did her best to defend him.