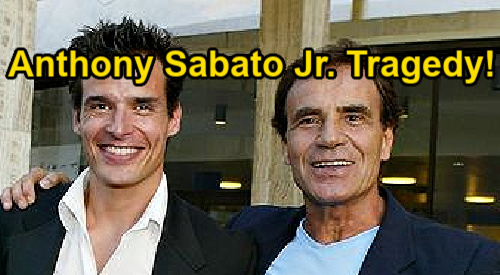 General Hospital (GH) spoilers has some sad news to pass on about a former GH star. Antonio Sabáto Jr., who portrayed Jagger Cates on GH from 1992-1995, recently announced that his father Antonio Sabáto Sr. has passed away at the age of 77. Antonio Sr. died from complications due to COVID-19 on January 6th.

Back on January 4th, Antonio Jr. announced on Twitter that his father had been hospitalized in California. Antonio Jr. wrote: “My papa/dad is in intensive care with COVID in California. Lord keep him surrounded by angels and pure God’s love and strength within.”

Later, Antonio Jr. took to Twitter again to announce that his father was fighting for his life and not doing well, and that he and his family could not see or be next to him due to COVID-19 restrictions. Then, on January 6th, Antonio Jr. shared the news of his father’s passing.

Antonio Sr. began his career in acting back in 1966, when he appeared in an Italian movie called “Lo Scandalo.” Antonio Sr. also appeared in the American movie “Grand Prix,” which won three Academy awards. In the movie, Antonio Sr. played the role of Nino Barlini.

Antonio Sr. is also known for his work in “Escape From The Bronx” in 1983 and “Calling All Police Cars” in 1975, and he appeared in numerous films during the 1970s and 1980s. In 2006, Antonio Sr. appeared in seven episodes of The Bold and the Beautiful, playing the role of Aldo Damiano.

Antonio Sr. was is survived by his son Antonio Jr., as well as a daughter named Simonne. We send our deepest condolences to the Sabáto family at this time. Stay tuned to General Hospital and we’ll keep you up to speed on all the latest General Hospital spoilers, updates, and news.