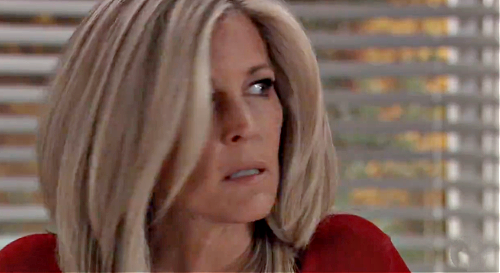 General Hospital (GH) spoilers tease that someone has to uncover the massive secret Nina Reeves (Cynthia Watros) is keeping. Nina has already had a couple of close calls since Jasper “Jax” Jacks (Ingo Rademacher) saw “Mike” aka Sonny Corinthos (Maurice Benard) following the derailed firehouse dance – and then Trina Robinson (Sydney Mikayla) came around The Tan-O as well.

However, Nina put out those fires since Jax assumes he imagined Sonny and Trina left without a Sonny sighting. Now Nina’s probably feeling like she can breathe a sigh of relief and settle back into this new life. Nina will just hope no one else from her past collides into her Nixon Falls future.

Of course, General Hospital spoilers say Nina’s not going to get her wish! There’ll inevitably be someone who comes along to ruin Nina’s plan, so who’s it going to be?

We’d say it seems quite likely that Jason Morgan (Steve Burton) and Britt Westbourne (Kelly Thiebaud) will end up seeking refuge in Nixon Falls at some point.

Now that Britt’s on the run with Jason, it’s a no-brainer to have them land in Sonny’s new town. Will Britt be the one to burst Nina’s Nixon Falls bubble?

General Hospital fans know Nina made a pact with Britt and Maxie Jones (Kirsten Storms) to look out for one another. Even so, this is one secret Britt may not be willing to keep since Sonny matters so much to Jason.

If Britt spots Sonny before Jason and confronts Nina, perhaps Nina will beg Britt to get Jason out of there. Nina might remind Britt of the pact they all made in the cemetery and hope she can count on Britt for help.

Nevertheless, General Hospital viewers know things have turned chaotic back in Port Charles without Sonny at the helm of his own organization.

Jason also loves Sonny – and Britt will have to consider all Sonny’s children, too. Britt may feel like she has no choice but to rat Nina out under the circumstances.

Will Britt be the one to expose Nina’s secret and reunite Jason with Sonny? As a result, Britt could set up a GH reunion between Sonny and Carly Corinthos (Laura Wright) as well.

Carly may have to be grateful for once if Britt brings Carly and her husband back together. Carly will certainly owe Britt her gratitude if that happens!

We’ll offer updates as other GH news pops up. General Hospital spoilers say a faceoff may be brewing between Nina and Britt, so stay tuned for more Sonny mayhem.

CDL’s where you want to be for sizzling General Hospital spoilers, news and updates, so stop by again soon.

“You, most likely, have about a week to live.” #GH pic.twitter.com/cJRWtigb2x