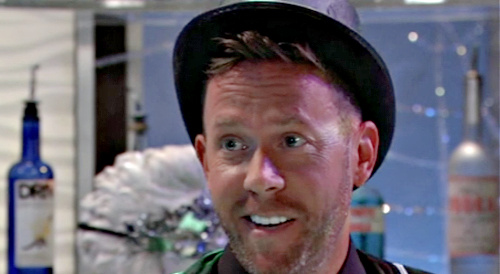 GH fans know Maxie thinks she has a way to handle Gladys with the help of a man named Kip.

Ned Quartermaine (Wally Kurth) recently worked Kip the bartender into a conversation as well, so that was seemingly the show’s way of reminding viewers who he is.

Of course, it’s not the bartending job that’s important here. What matters is what Kip does on the side – and that’s acting gigs. Kip has stepped up in the past for various acting jobs around town.

For example, Julian Jerome (William DeVry) once hired Kip as part of his plan to break up Brad Cooper (Parry Shen) and Lucas Jones (Matt Trudeau).

In other words, Kip’s kind of the shady actor staple who’ll do anything for a good role and a quick buck.

During the week of November 8-12, Maxie and Brook Lynn will have another strategy session.

They’ll get together to discuss the next phase of their scheme, but things won’t work out as well as they’re hoping.

The plan is probably to sell Kip as Brook Lynn’s “baby daddy” and come up with some story for why it’s best if he’s not in his child’s life.

Brook Lynn might try to convince Gladys that there’s danger somehow and act like even Gladys herself could be in jeopardy because she knows the “truth.”

It’d be easy for Kip to pretend he’s part of a menacing mob family – and Gladys is a bit wary of those right now due to what happened with Vincent Novak (Glenn Taranto).

Maxie will feel confident Kip can help take care of their Gladys problem one way or another.

Unfortunately, Gladys will make a shocking discovery during the week of November 15-19, so she may prove she’s a super snooper.

Perhaps Gladys will witness Kip getting paid or overhear something that lets her know he’s just the hired help.

Whatever the case, Gladys will then make even more demands – and they’ll be particularly outrageous ones this time around.

Chase will also catch on when it comes to at least some of this drama and will have serious doubts about the story Brook Lynn is trying to push.

Throw in nosy Austin Gatlin Holt (Roger Howarth) and it’s easy to see how this will turn into quite the mess!

Maxie and Brook Lynn will feel in over their heads as they work to keep the truth about “Bailey Quartermaine” aka Louise August (Harper and Scarlett Bloom) under wraps.

There’ll be some crucial strategy shifts as this storyline moves along, so stay tuned. We’ll keep you in the loop as other GH news and updates emerge.

CDL’s where you want to be for terrific General Hospital spoilers, updates and news, so stop by frequently!