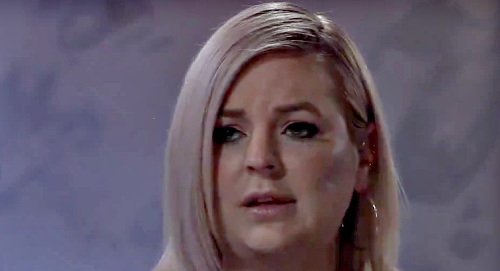 General Hospital (GH) spoilers tease that the long-awaited double wedding is coming up in Port Charles – and it’s sure to be a can’t-miss event. GH fans can expect Peter August (Wes Ramsey) to keep making sneaky moves as he tries to preserve his future with Maxie Jones (Kirsten Storms) and the family they’re creating.

It’ll feel like the walls are closing in as Peter, but he’ll do everything in his power to make sure he still makes Maxie his wife. However, this wedding will bring some shocking truths to light. That goes for both Peter and Maxie!

Peter will be faced with the bombshell of who his real mother is – and that’s Alex Devane Marick (Finola Hughes), not Anna Devane (Finola Hughes). It looks like Maxie will also discover all the crimes Peter’s been keeping from her, so Peter will feel like his life has completely fallen apart.

Faced with the prospect of losing Maxie and their baby, what will Peter do next? It’s safe to say Peter won’t just surrender willingly. Peter will inevitably fight to the bitter end for the “Paxie” family, so Maxie’s in danger of being taken hostage.

Of course, Dante Falconeri (Dominic Zamprogna) will also play a big role in the shockers that unfold at the double nuptials. There’s no way Dante will just stand by and let Peter kidnap Maxie, so this could be enough to trigger the final phase of his “complete the mission” programming.

That’s especially true if there happens to be a clicking pen nearby!

General Hospital spoilers say Dante will do whatever he can to save Maxie, but he may end up making an even bigger mess. There have been some rumblings about Maxie potentially getting shot by mistake, but we’ll just have to see how it all plays out.

You can bet Dante will cause chaos no matter what, so this double wedding will definitely be one to remember.

As other news and updates become available, we’ll keep you posted. General Hospital spoilers say Peter’s upcoming meltdown will kick off another chapter of exciting drama, so don’t miss all the action.

CDL’s your go-to source for scorching General Hospital spoilers, updates and news, so pop back in soon for the latest GH details.