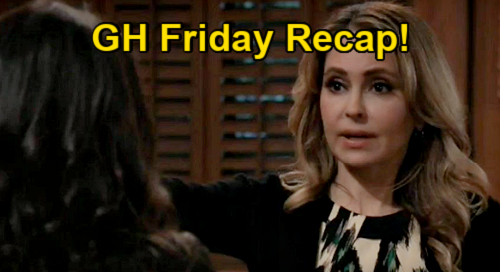 Lenny was bristly toward Sonny, saying that Phyllis picks up too many strays. Ultimately, Lenny gave Sonny some coffee, and Sonny offered to work in the kitchen.

Lenny told Sonny that he’d have to answer to him if he brings any trouble to the bar. As they sat and had coffee, Phyllis mentioned the woman in Port Charles who lost her daughter, meaning Nina Reeves (Cynthia Watros), but it didn’t seem to ring a bell with Sonny.

Later, some guy came in and pulled a gun on Lenny threatening to rob the place, and Sonny watched carefully.

At the hospital, Tracy Quartermaine (Jane Elliot) visited with Hamilton Finn (Michael Easton), and she wondered why Finn seemed so glum. Finn told the story of the double wedding and about how his stepmother is Jackie Templeton (Kim Delaney), which surprised Tracy.

Finn told a heavily edited version of the Jackie story, explaining that he made a lot of mistakes and didn’t take well to the fact that his dad married Jackie so soon after his mother’s death. Finn said he was thinking of coming clean about his mistakes, but Tracy advised him against it. Finn seemed torn.

Alexis came downstairs and proceeded to burn the photos in Julian Jerome’s (William deVry) photo album, while Sam went outside to call the security company.

Sam returned and Alexis went to bed, then Sam told Olivia that Alexis’ alarm wasn’t disarmed during the time Tracy said that she brought Alexis home on the night of Alexis’ DUI.

Sam and Olivia wondered why Tracy would lie about what happened that evening, and soon Tracy showed up at the house to check on Alexis. Before Tracy left, Sam mentioned the new alarm system to Tracy, who didn’t blink an eye. After Tracy left, Sam said that Tracy’s story doesn’t add up.

At the Metro Court, Harrison Chase (Josh Swickard) was nursing a beer when Michael Corinthos (Chad Duell) saddled up to the bar. Chase expressed his condolences over Sonny, and he urged Michael to be careful, since there was recently an incident in the warehouse district.

Chase then let it slip that he and Willow Corinthos (Katelyn MacMullen) kissed, and Michael left upset.

At the Q mansion, Sasha Gilmore (Sofia Mattsson) showed up at Willow’s urging. Willow thanked Sasha for comforting Michael in the wake of Sonny’s death.

Through their conversation, Sasha told Willow that she knew that she and Michael were sleeping together. Willow said that it wasn’t that simple, as she had feelings for Chase.

Sasha cautioned Willow, saying that she wasn’t going to be the deciding factor to help her decide between Chase and Michael. Michael then returned home, and Sasha took off. Michael and Willow decided that it was time for them to have a talk.

At Pozzulo’s, Cyrus Renault (Jeff Kober) told Brick (Stephen A. Smith) and Jason Morgan (Steve Burton) that he wanted to have a drink to celebrate Sonny’s life, then he started griping about his mother’s kidnapping.

Jason mentioned the Novak family and how they suffered a great loss in the warehouse district.

Cyrus took off, and Brick questioned why Jason would kidnap an old woman.

Jason didn’t explain himself, but he said that he was going to do nothing, because if Cyrus got his mother back, he’d start taking more and more. “I’m not going to let that happen,” Jason said.

Finally, back at the hospital, Chase approached Finn, saying that his luck might be changing and that he just might get Willow back. Chase told Finn thanks for the great advice on that subject, noting that he couldn’t have gotten better advice from their dad.

That was a great episode of General Hospital, and it was a fantastic way to round out the week! Here at CDL, we’ll keep you current on all your General Hospital spoilers, updates, and news. Stick with us!