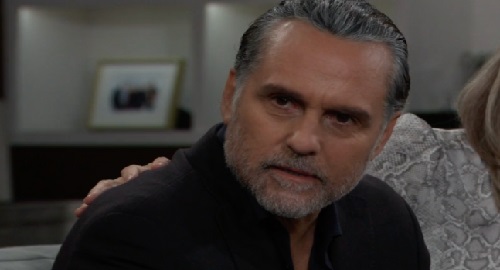 At home, Sonny was pleased when Phyllis dropped by for a surprise visit. Sonny introduced Phyllis to Carly Corinthos (Laura Wright), who thanked Phyllis for taking such good care of her husband during his ordeal.

Phyllis offered up a box of some things Sonny left behind when he was living in Nixon Falls. Carly laughed over the flannel and cowboy hat inside before suggesting “Mike” had an interesting sense of style. She eventually gave Phyllis and Sonny some alone time, so Phyllis admitted she also came because she wanted to meet Sonny as himself.

After Sonny and Phyllis playfully introduced themselves, they shook hands and embraced. Phyllis mentioned leaving some Nina Reeves (Cynthia Watros) out of the box due to the complex situation.

Sonny acknowledged that there’d been an adjustment period back home and asked about The Tan-O, but Phyllis was uncertain about whether she’d rebuild. Phyllis admitted she’d be sticking around Port Charles for a while since she had to settle things with Nina.

Sonny pointed out it was Nina’s fault that the bar got torched, but Phyllis couldn’t turn her back on her despite her mistakes. She didn’t seem to think Sonny could cut Nina out of his life either.

At the Metro Court, Nina was apologetic over the trouble Liesl Obrecht (Kathleen Gati) landed in. She talked to Britt Westbourne (Kelly Thiebaud) about that as well as Britt’s romance with Jason Morgan (Steve Burton), but Britt insisted that was a thing of the past. Carly was always going to be number one in Jason’s book and Britt refused to be anybody’s second.

Britt also felt Nina should stay on guard since Carly probably wasn’t done with her yet. In a suite, Spencer was glum about the situation he’d brought upon himself. Esme couldn’t understand why Spencer confessed and trashed his friends – especially Josslyn – for how they’d treated him.

Spencer argued that they were perhaps the only real friends he’d ever had and reminded Esme that they were guilty. Soon after, a hotel employee informed Spencer that his card had been canceled and couldn’t be charged for another night. Spencer told Esme that meant they had to pack.

Afterward, Spencer tried to convince Britt to let him stay at her place along with Esme. However, Britt pointed out she was living in a suite at the Metro Court, so there was no room for the two of them.

Once Britt heard the stalker story, she wasn’t too happy with Spencer and felt he had to make things right with his father. Carly showed up and clashed with Spencer briefly, but she later turned her attention to Britt and hoped they could have a conversation involving “radical honesty.”

As for Trina Robinson (Sydney Mikayla), she filled Portia Robinson (Brook Kerr) in on her role in helping to unmask Ava Jerome Cassadine’s (Maura West) stalker. Trina explained how Spencer pretended to be “Victor” at first and addressed the fake blood incident.

Although Portia felt Trina was manipulated and put the blame on the Cassadine men, Trina still felt guilty. Since Trina kept quiet about Spencer being in town for weeks before he reunited with Nikolas Cassadine (Marcus Coloma), she decided to apologize to Ava.

Nikolas and Ava enjoyed their reunion at Wyndemere, where Ava learned Nikolas cut Spencer off financially. Ava seemed concerned about how Nikolas was handling the matter, but he felt Spencer was resourceful and would figure something out.

Once Trina arrived, she explained the whole “Victor” situation to Ava and why she’d hid the truth. Ava didn’t blame Trina at all and felt like she’d finally found a true friend. After Trina talked about not being able to trust Spencer, he showed up looking for Nikolas.

As for Portia, she had a run-in with Nikolas and ranted about her daughter getting hurt. Portia made it crystal clear that she wanted Spencer to stay away from Trina.

At Kelly’s, Josslyn pointed out that on every team she’d ever been on, there was a captain. She felt confident Esme was calling the shots and leading Spencer down a bad road. Cameron didn’t think Spencer was some innocent angel, but Joss remained most upset with Esme.

When Nina arrived, Cameron left Josslyn to speak with her alone. Josslyn insisted she had something for her and revealed that it was the journal Nina once offered as a gift. She ripped pages out as she talked about writing after Sonny’s funeral and when she heard Carly sobbing in grief.

Josslyn felt Nina was responsible for their family’s pain and suggested she’d keep the pages, but she had no use for the journal itself and never wanted to see Nina again. As for Esme, she found Cameron and said she needed him desperately. Esme turned on the waterworks and acted like she didn’t want Spencer to lose his friends.

Cameron pointed out he was still Spencer’s husband and didn’t hate him. He had hope for Spencer and Josslyn working things out, too. Josslyn ultimately came out to find Esme with Cameron and didn’t look happy about it.