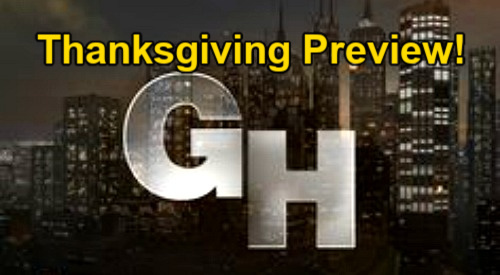 General Hospital (GH) spoilers tease that it’s never too early for a Thanksgiving preview – and we’ve got one that features surprise returns, emotional outbursts and painful family drama. This will be a time to give thanks, but some PC residents will be more grateful than others this year! Let’s talk about what’s coming up in GH’s two Thanksgiving episodes.

For starters, we should mention that Jasper “Jax” Jacks (Ingo Rademacher) will exit before the Thanksgiving celebrations get underway.

Ingo Rademacher’s last airdate as Jax will be on November 22, so Josslyn Jacks (Eden McCoy) won’t have her dad around for this special holiday.

Fortunately, Josslyn’s stepdad is home where he belongs after all the Nixon Falls mayhem. Sonny Corinthos’ (Maurice Benard) return is something all his loved ones can be thankful for.

Things aren’t perfect since Sonny’s a new version of himself, but the fact that he’s not dead is a huge plus!

General Hospital spoilers say the Thanksgiving fun will eventually kick off on Wednesday, November 24. A holiday parade will get underway, so that sounds like something Hamilton Finn (Michael Easton), Elizabeth Baldwin (Rebecca Herbst) and their kids might want to watch together.

Thanksgiving also seems like the ideal time for Liz to get a blast from the past.

Some surprise arrivals are happening during these holiday episodes, so Jeff Webber (last played by Richard Dean Anderson) may be one of them. Will the return of Liz’s father catch her off guard?

Wednesday’s stories will instead continue after the weekend when a brand-new episode airs on Monday, November 29.

In addition to the surprising arrivals we mentioned, there’ll be stunning news as well. GH fans will also see some shocking encounters along with some heartfelt apologies and fierce faceoffs.

Thanksgiving can bring out the best in some families and the worst in others, so these episodes should be a mixed bag when it comes to emotions pouring out.

Of course, it just wouldn’t be Thanksgiving without pizza and a song for the Quartermaine family, so those are two traditions to look forward to.

We’ll see some characters trying to make sense of the past, present and future during all the holiday hoopla, so Thanksgiving should be a pivotal time.

Alexis was just released following her pardon, so it’s good to know she’ll be back home with her daughters in time for Thanksgiving.

There’ll be some other interesting reunions along the way, so don’t miss what’s ahead on the ABC soap.

General Hospital spoilers say fans will get a double dose of Thanksgiving goodness in these special episodes, so be sure to tune in on November 24 and November 29.

CDL’s where you want to be for the hottest soap spoilers, news and updates!