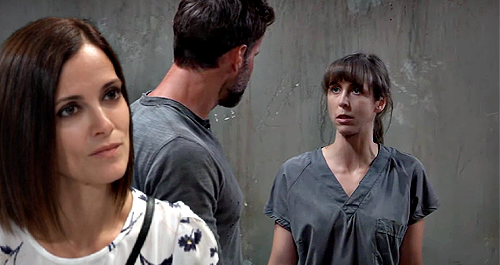 General Hospital (GH) spoilers tease that Hayden Barnes (Rebecca Budig) may be revealed as the screaming mystery prisoner. Hayden could be Drew Cain (Cameron Mathison) and Nurse Chloe Jennings’ (Phoebe Kuhlman) fellow captive, so let’s discuss the clues and where this storyline may be headed next.

Drew was happy to finally find a friendly face when he met Chloe, who’s also stuck in that foreign prison.

However, their situations are a bit different since Chloe’s putting her medical skills to good use and therefore doesn’t have to wear handcuffs. It would prevent Chloe from doing her work, so she’s got an advantage here.

Drew picked up on that and urged Chloe to rat him out over the pen stealing in the August 24 episode.

As Drew predicted, it indeed went a long way toward earning Chloe some trust with the guards. This could be quite helpful as Drew and Chloe plot their escape since the guard won’t expect Chloe to cause trouble.

Of course, there may be a third prisoner who ultimately joins in this escape attempt. Drew isn’t the kind of guy to just leave someone in need behind, so that brings us to the screaming woman he heard.

Chloe explained that it was a female prisoner whose accommodations were downgraded. The nurse assumed that this captive was causing trouble and that led to her transfer.

Based on all the screaming, this woman was being tortured and is just as eager to get out of there as Drew is.

Naturally, the fact that GH is being so mysterious suggests it’ll end up being a face Drew recognizes.

There’s a good chance Drew’s storyline is going to collide with Hayden’s story, so the screamer may be none other than missing Hayden herself.

Sam McCall (Kelly Monaco) has considered a possible link between Hayden and Drew’s cases, but she can’t quite connect the dots.

Nevertheless, the writers should ultimately do just that and explain how Hayden’s return arc fits in with Drew’s big comeback.

It looks like Victor Cassadine (last played by Thaao Penghlis) is the big baddie running the show, so we’ll see if Charles Shaughnessy’s September debut brings a Victor recast.

CDL will have other terrific General Hospital spoilers, updates and news, so make us your one-stop source.