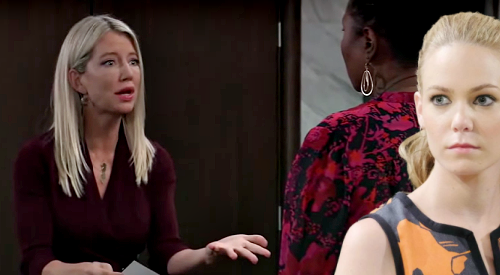 General Hospital (GH) spoilers tease that Nelle Benson Jerome (Chloe Lanier) still has a lot of influence over the goings-on in Port Charles, even though she’s dead and gone.

As GH viewers know, Nelle is very much on the mind of Nina Reeves (Cynthia Watros), who recently found out that Nelle was her long-lost daughter. It’s a sad state of affairs for Nina, since Nelle is gone forever.

But since this is a soap, there’s always the possibility that Nelle could come back from the dead at some point down the line. Sure, there would be some pesky details that would have to be explained, like how Harrison Chase (Josh Swickard) could have identified Nelle’s body in the morgue if she’s not really dead.

But it’s still within the realm of possibility that Nelle could return.

And what a time it would be for Nelle to come back! Nelle would have a new mother to manipulate and frustrate. Nelle probably wouldn’t be happy with Nina – both for not successfully finding her sooner, and also for ruining her custody case against Michael Corinthos (Chad Duell) last year.

Let’s just say that it wouldn’t be a warm mother/daughter reunion by any means.

But there would probably be more on Nelle’s mind than just lashing out against Nina. Nelle may also want to get even with someone else who seriously changed the trajectory of her life in a very big way – Phyllis Caulfield (Joyce Guy).

Phyllis has been feeling guilty about how she drove an infant Nelle to give her to Frank Benson and his wife back in the day.

Well, if Nelle were to come back onto the scene, she could really make Phyllis’ life difficult for what she did. Nelle would probably rant and rave, accusing Phyllis of ruining her life and placing her with a man who would later sell her kidney and treat her terribly.

All that rage that Nelle has previously directed at Carly Corinthos (Laura Wright) would probably be redirected squarely at Phyllis.

One thing’s for sure – if somehow Nelle did survive her fall and she does make a reappearance in Port Charles, it’s not going to be easy on either Nina or Phyllis.

As GH viewers know, Nelle is a master manipulator and enjoys getting revenge, and for once, her anger and resentment won’t come out toward Carly. It could get ugly really fast for both Nina and Phyllis.

Do you think that there’s any way that Nelle is alive and will return to cause trouble for Nina and Phyllis? Stay tuned to the ABC soap and CDL will keep you up to speed on the latest General Hospital spoilers, updates, and news.