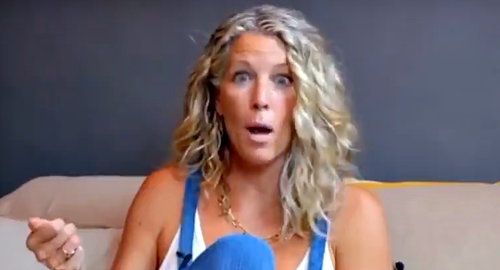 Maurice Benard had Laura Wright as a guest on his State of Mind show, so that offered an opportunity for the two of them to discuss their new pairings.

Wright talked about watching Benard film a kissing scene with Cynthia Watros (Nina Reeves) early on and thinking Nina’s romance with “Mike” was so sweet.

Wright thought the story being told was one that made you want to fall in love with both sides – seemingly meaning Sonny’s new romance as well as his old one with Carly.

Of course, that goes for Carly and Jason as well, but Wright had a bone to pick with fans who use that fast-forward button too often.

“A lot of people are not kindly freaking out about the Carly-Jason thing,” Wright said. She went on to suggest that fast-forwarding was the culprit since viewers weren’t taking the time to see the relationship develop.

“Well, if people would stop FFing and watch,” Wright insisted. “That’s the problem…the FF button has destroyed us because, you know, the journey that we take you on from taking two people that you’d never want together, but if you watch…”

Wright did admit she’d been known to fast-forward stressful scenes when she watches TV. Naturally, some fans might argue that watching two people they’d never want together is stressful!

Others haven’t touched the fast-forward button at all and still have no interest in seeing Jason and Carly in any kind of romance.

Sometimes the chemistry or lack thereof is more of the culprit than skipping scenes – and that’s certainly the case for many people here.

Not to mention there wasn’t much buildup that’d indicate the shift from friends to lovers anyway!

Laura Wright obviously wants fans to be more open-minded about Jason and Carly’s relationship, but plenty of viewers are eager to see this whole storyline wrap up instead.

General Hospital spoilers say Sonny will make a big Port Charles comeback before long, so it’ll be interesting to see how it all plays out.

CDL’s where you want to be for sizzling General Hospital spoilers, updates and news, so make us your number one source.