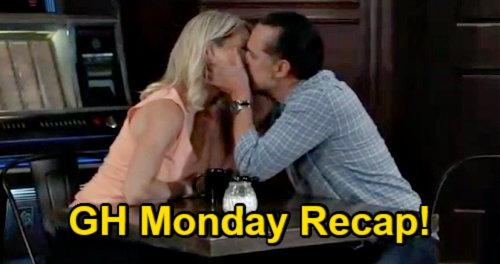 GH spoilers reveal that on Monday’s episode, Portia invited Jordan Ashford (Briana Nicole Henry) to coffee. Jordan declined and it seemed as if she wanted to give a polite excuse. Jordan changed her mind and blurted out the real reason.

Jordan and Portia’s tense conversation wasn’t the only confrontation. Curtis told Stella to stop interfering in his love life. Stella is told what really happened and that he and Portia were not sneaking around behind Jordan’s back.

Then, the meddler hunts down Portia and explains she doesn’t want her or Curtis to get hurt. Portia listens as Stella insists that if she keeps seeing Curtis, that’s exactly what is going to happen. People are going to get hurt and Portia is reminded of her affair.

That is when Trina shows up and hears her mother being called “the other woman.”

Chase has been keeping a secret, which is just how much he has recovered. Austin just happens to see Chase standing up and taking a step on his own. Chase is confronted about his progress later and is told that Willow doesn’t know.

Chase wants to make it a romantic celebration by watching Willow’s face as he walks toward her. Austin urges him to tell his wife the truth.

General Hospital spoilers reveal that Willow is emotionally overwhelmed with everything going on.

In addition to her love triangle and the bittersweet celebration of Wiley Quartermaine-Corinthos’ (Erik and Theo Olson) birthday, an uninvited guest shows up. Willow opens the door to find Harmony Miller (Inga Cadranel) standing there.

Harmony is let in but it’s a difficult situation for Willow, which Michael observes. Harmony claims that she is there to make amends, which Willow wishes were true but is suspicious. Michael ends up ordering Harmony to leave.

Needing time to be alone and process everything, Willow heads to the gatehouse. Michael follows and tries to comfort her.

An embrace turns into kissing, which leads to something more. Michael and Willow end up engaging in passion and of course, it is right when Austin gives Chase a helping hand getting inside.

Nina Reeves (Cynthia Watros) has been feeling guilty about keeping Sonny Corinthos aka “Mike” (Maurice Benard) in the dark. As they talk about Lenny Caulfield’s (Rif Hutton) condition, Sonny admits that he feels a familiar pain, as if it’s a memory.

Sonny assumes that he is feeling that pain because his own family must be gone. Nina’s guilt multiplies but she doesn’t tell him the truth — at least, not right now.

“Mike” happens to startle Nina just as Carly Corinthos (Laura Wright) shows up on the screen. How will Nina handle this situation and how much longer until this secret is finally exposed?