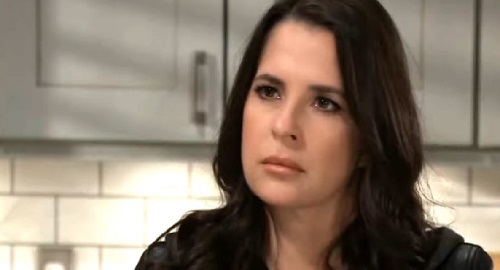 At Kelly’s, Josslyn Jacks (Eden McCoy) will deliver some shocking news to Willow and Michael.  Josslyn will explain that Nina knew Sonny Corinthos (Maurice Benard) was alive for months and kept quiet about it, but Willow will feel like maybe there’s been some mistake.

Willow won’t want to believe Nina would do something so cruel, but Josslyn will insist it’s true.  Once Michael and Willow really think about it, they should realize this is a good explanation for Nina’s weird, emotional behavior at the Quartermaine mansion.  It should dawn on them that Nina feared she was essentially saying goodbye to Wiley Quartermaine-Corinthos (Caleb and Kyler Ends).

At Wyndemere, Spencer will understand why Nikolas is angry over his confession, but he’ll really hope they can move past this.  Spencer will ask if Nikolas can forgive him, but Nikolas certainly won’t be doing that anytime soon.

Instead, Nikolas will throw Spencer out of the house and cut off all financial access to the Cassadine fortune.  He’ll infuriate Spencer, who’ll act like Nikolas and Ava Jerome (Maura West) are just as bad or worse than he is.

Ava may wonder if Spencer really hated her so much that he’d drag an innocent little girl into this.  That’s exactly what Spencer did by involving Avery Corinthos (Ava and Grace Scarola), so that’s the part that should hurt and enrage Ava the most.

Ava will also ask about why this eleventh-hour confession happened and should learn Esme Prince (Avery Kristen Pohl) was involved – though Spencer will stick to his bogus story about her acting entirely on his orders.  The torched car and hospital badge situation will really make Spencer look like a sicko.

While Nikolas orders newly broke Spencer to leave, Trina Robinson (Sydney Mikayla) and Cameron Webber (William Lipton) will fill Josslyn in on all the Wyndemere chaos.  Esme will also finish her strange, clandestine meeting with Ryan Chamberlain (Jon Lindstrom) and will apparently cross paths with the teen trap crew.

“I’m very happy to say it didn’t work,” Trina snarls in Monday’s GH preview video.  Although Spencer covered when it came to Esme’s guilt, he still outed her involvement in the stalker scheme.  Trina will be glad the truth was exposed and may warn Esme not to mess with the people she cares about again.

At some point, Esme will head to The Savoy for her own private victory party.  “We have so much to celebrate,” Esme says over the phone in the preview clip.  Will that call be to Spencer before Esme finds out what’s gone down?  Could Esme have another accomplice besides Ryan who gets a call instead?

Whatever the case, Esme will remain quite the troublemaker.  Trina will choose to show sympathy for Spencer, but she’ll have none for that twisted girlfriend of his!

Next, Nina will come clean to Curtis Ashford (Donnell Turner) about keeping Sonny’s survival under wraps.  She’ll wonder if this changes things for Curtis and will truly hope they can keep their friendship intact.

Curtis won’t approve of Nina’s behavior, but perhaps Jordan Ashford’s (Briana Nicole Henry) recent brush with death taught him that life’s too short to hold grudges.  As for Carly Corinthos (Laura Wright), she’ll argue with Sonny about Nina’s motives.  Carly may act like Nina was coming from a purely vindictive place, but Sonny will still try to shield his former flame somewhat.

This would be a good opportunity for Sonny to confess that Nina loved “Mike” and admit he thought he loved her, too.  Sonny won’t want to hurt Carly, but he’ll need her to get that the whole Nixon Falls ordeal was more complicated than it seems.  Nevertheless, Nina got off easy as far as Carly’s concerned!

Over with Sam and Dante Falconeri (Dominic Zamprogna), it looks like they’ll head to Monte Carlo and pull a con for a good cause.  Some casino drama is coming up that’ll lead to Sam throwing a drink in someone’s face.  “How dare you!” Sam shouts in Monday’s preview video.

Sam might toss that drink at Dante as part of a fake argument – especially if they need a sudden distraction.  Regardless, some fantastic scenes are on the way, so we’ll bring you updates as other GH details emerge.