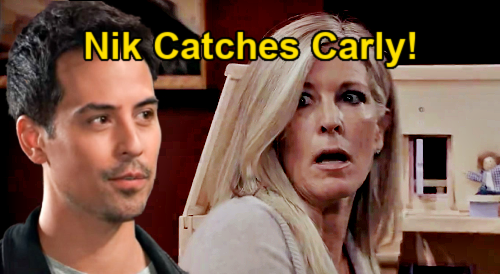 Josslyn Jacks (Eden McCoy) will fill her mom in on how the half-heart pendant ended up in Ava Jerome Cassadine’s (Maura West) hands, so Carly will have plenty of reasons to be concerned.

Carly will think she needs to get the necklace back as soon as possible, so she’ll call on Jax to help her. However, Jax won’t be down for carrying out some sneaky break-in plan with Carly.

Jax will think Carly should accept that the real story’s going to come out, but Carly will dismiss the notion and enlist Bobbie Spencer (Jacklyn Zeman) for her plot instead.

That plot will go awry once Carly’s snooping in Avery’s room at Wyndemere. GH spoilers say Carly will hope to find the necklace, swipe it and leave without anyone noticing she’s there. Bobbie will keep Ava busy, so Carly will just try to work fast and get the job done.

Unfortunately, Carly won’t be fast enough to avoid discovery. Someone will arrive in time to catch Carly – and General Hospital spoilers say it looks like that someone will be Nikolas Cassadine (Marcus Coloma).

General Hospital spoilers say Nikolas will be pensive right after Carly and Bobbie carry out their plan. Later, Nikolas will end up confiding in Laura Collins (Genie Francis) and seeking some guidance.

Obviously, Nikolas is going to learn something if he’ll be so pensive and in need of advice. Carly might get caught red-handed with the necklace and have to admit it’s important no one ever sees it. She may not go into the details of why, but she may want Nikolas to trust her on this.

Carly might point out that she kept Nikolas’ return to Port Charles a secret once upon a time and ask him to keep this secret for her now. Perhaps Carly will plead with Nikolas to let Ava think that Avery simply lost the necklace.

Whatever the case, it’s clear that Carly will be awfully desperate – and Nikolas will be just as suspicious!

As other GH news and updates emerge, we’ll keep you in the loop. General Hospital spoilers say there could be trouble if Nikolas spots Nina Reeves’ (Cynthia Watros) necklace later and starts putting the puzzle pieces together.

In the meantime, Nikolas may have to decide how much he’ll reveal to Ava. CDL will have other sizzling General Hospital spoilers, updates and news, so check back often.