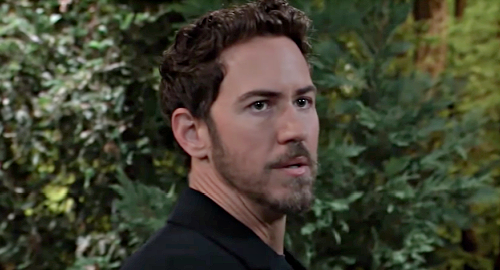 General Hospital (GH) spoilers tease that Peter August (Wes Ramsey) may snatch Maxie Jones (Kirsten Storms) in Texas and Louise August aka “Bailey Quartermaine” (Harper and Scarlett Bloom) in Port Charles. Could Peter pull off two kidnappings in an attempt to bring his family back together?

Now that we know Peter’s body wasn’t in that freezer, it opens the door for Peter to cause more chaos.

Peter was clearly obsessed with Maxie and building a future with her. He certainly wanted a chance to be a family and be a devoted father to their daughter.

Peter might’ve needed some recovery time following his staircase tumble and brush with death, but he may be ready to carry out his next scheme.

Peter previously had plenty of minions working for him, so someone could’ve been monitoring the situation in Port Charles while Peter was on the mend.

Brook Lynn Quartermaine (Amanda Setton) was previously concerned about Maxie’s constant visits with “Bailey” since she feared Peter could indeed be watching somehow.

If Brook Lynn’s suspicions were correct, Peter may have put the clues together. Perhaps Peter will eventually kidnap Louise – either himself or through someone he sends to get the job done.

Brook Lynn would inevitably panic and call Maxie back to deal with the crisis, but she might be horrified to learn Maxie’s gone missing, too.

Peter’s goal was to run away with Maxie and Louise, so it’s reasonable to assume he’ll want to get that goal back on track.

In order for that to happen, Peter will have to abduct both Louise and Maxie.

Since Maxie is off canvas due to Kirsten Storms’ brain surgery recovery anyway, the show might as well have Maxie become Peter’s captive.

Maxie’s with family in Texas right now, but it’s not like viewers are seeing that visit. GH can create more drama if Maxie’s off screen as Peter’s hostage instead.

That could be where this hot plot’s headed, so we’ll see just how far Peter will go to reunite with Maxie and finally meet Louise.

Peter may be delusional enough to think he can still build a family with Maxie and their daughter, so a double kidnapping scheme could be looming.

As other GH news emerges, we’ll pass along updates. General Hospital spoilers say some twists and turns are still to come in Peter’s storyline, so stay tuned.

CDL will have other sizzling General Hospital spoilers, updates and news to read up on, so stick with us.