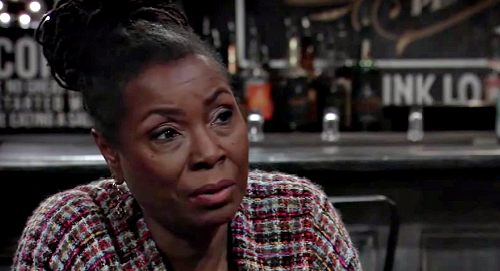 GH fans know Phyllis has been a good friend to Nina during her time in Nixon Falls. Phyllis and Lenny Caulfield (Rif Hutton) welcomed Nina with open arms, so she was incredibly grateful for help during a difficult crisis.

Nina felt like she’d lost her way in life, but she found a path forward with the help of Phyllis, Lenny and “Mike.”

It’s almost like they all formed a new little family, so it’s going to be quite a blow when Phyllis realizes Nina’s been lying to her.

Phyllis is already trying to cope with Lenny’s death, so it’ll be tough once all this gets piled on.

Nina kept her mouth shut about who “Mike” really was – and as a result, Sonny’s wife and children suffered. Not to mention Nina’s own grandson!

Nina was keeping Wiley Quartermaine-Corinthos (Erik and Theo Olson) from Grandpa Sonny as well, so this Sonny survival secret was all kinds of wrong.

Phyllis will ultimately get updates on Nina’s deception, so she’ll no doubt be upset about her previous matchmaking.

Phyllis had no idea she was pushing Nina into the arms of another woman’s husband.

Although Phyllis doesn’t know Carly, she knows what it’s like to lose the man she loves.

Phyllis’ recent loss of Lenny will surely affect how she reacts to Nina in this upcoming confrontation. Phyllis should be furious with Nina for letting Carly go through months of unnecessary pain.

During the week of September 13-17, Nina will struggle to make sense of her behavior. She’ll explain as best as she can, but she’ll know there’s no excuse good enough when it comes to all her lies.

Once Nina makes her apologetic spiel, General Hospital spoilers say Phyllis and Nina will try to hash things out.

That doesn’t mean Phyllis will understand or get past this anytime soon, but it does offer hope that maybe Nina can get Phyllis to forgive her eventually.

Nina will also have to face the wrath of Sonny’s left behind loved ones, so more showdowns are on the way!

General Hospital spoilers say Nina has plenty of payback in her future, so stay tuned.

CDL will have other exciting soap spoilers, news and updates, so make us your go-to source.