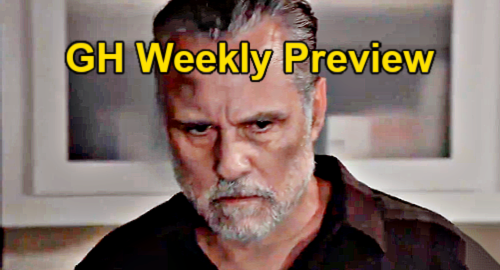 GH spoilers reveal that Nina’s secret is now out and there is no escaping the consequences. Valentin Cassadine (James Patrick Stuart) softly questions Nina.

Of course, Jasper “Jax” Jacks (Ingo Rademacher) supervises the questioning to make sure Nina tells the whole truth. Nina tells Valentin she was being blackmailed, which only prompts more questions.

In the weekly preview, Valentin looks confused as Nina starts to tell him the truth. When he asks what Nina was being blackmailed with, she will be forced to tell the truth. Jax won’t allow Nina to skirt or scheme her way out of this.

When Nina tells Valentin that Peter August (Wes Ramsey) threatened to expose her secret fantasy romance with Sonny, there will be quite a reaction.

Peter is a dangerous man. Nina knew Peter was alive and kept it a secret to keep her fantasy romance going as long as she could.

This news will understandably horrify both Valentin and Anna Devane (Finola Hughes), as well as everyone else in Port Charles.

General Hospital spoilers reveal that the weekly promo shows Jason and Carly in the limo after their wedding. Since the bride and groom go missing, Maxie Jones (Kirsten Storms) will be searching for them.

In Maxie’s crazy life, she needs something to control and right now, that’s keeping the wedding and reception on schedule.

A bomb was planted on Jason and Carly’s limo, but Ms. Wu had a change of heart.

Ms. Wu hugged Jason after the wedding ceremony and whispered something in his ear. Then, Jason and Carly get in the limo just as a vehicle explodes.

Who gets blasted to bits? We know it’s not Jason and Carly as Sonny returns home to find them together during the week of September 20.

So, we will have to keep watching the ABC soap to find out what happens next!

“What is keeping them?” #GH pic.twitter.com/Ew8lf2NkRl