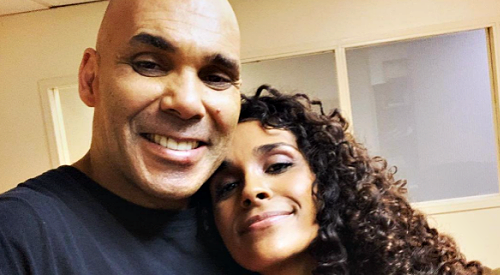 General Hospital (GH) spoilers has some fun news to pass on about a possible romantic direction for a popular GH character. Réal Andrews, who portrays Marcus Taggert on the ABC soap, is quite active on social media, and if you’re fortunate enough to follow him, then you know that he frequently comments about his alter ego Taggert and posts fun things for fans.

Well, recently, Réal posted a photograph on Instagram and Twitter of himself with Briana Nicole Henry, who portrays Jordan Ashford on GH. Réal’s caption reads: “Taggert n Jordan…? Should they hook up…? Yes or No.”

Of course, GH fans know that Jordan and Taggert are long-time colleagues, and they fabricated evidence to bring down Cyrus Renault (Jeff Kober) back when they were working on the task force together.

And earlier this year, Jordan helped Taggert fake his own death to protect his daughter Trina Robinson (Sydney Mikayla).

It wouldn’t seem so out of the question for Jordan and Taggert to get together. But would fans go for it? Well, it looks from the comments on Réal’s post that feelings are mixed, with some liking the idea and some thinking that Jordan and Taggert should remain just colleagues and friends.

Maurice Benard (Sonny Corinthos) was quick to weigh in on the matter. Maurice responded on Instagram to the post with a bunch of red heart emojis. Réal then replied to Maurice by saying “don’t be jealous.”

One fan commented: “YES…They have history with each other (work). Would be nice to see Taggart in a relationship.” And someone else said: “Not sure yet – need to see if they have chemistry on GH, but I want him hooked up with someone to stay on GH.”

And then someone else responded by saying: “Sorry – no. I want Taggert and Portia back together – and I will love that for Trina also. I like Taggert and Jordan as coworkers and FRIENDS.” Finally, someone thought that perhaps a different relationship would work for Taggert – with Epiphany Johnson (Sonya Eddy)!

We’ll see what happens on the show going forward. Right now, Jordan is struggling to save her marriage to Curtis, so she probably won’t be looking in Taggert’s direction anytime soon.

But you never know what can happen on soaps, so stay tuned! Here at CDL, we’ll keep you informed on all the latest General Hospital spoilers, updates, and news.

Taggert n Jordan…?
Should they hook up…?
Yes or No
💜💜💜💜💜💜💜#gh #taggertsback pic.twitter.com/UNpiWZZzGi