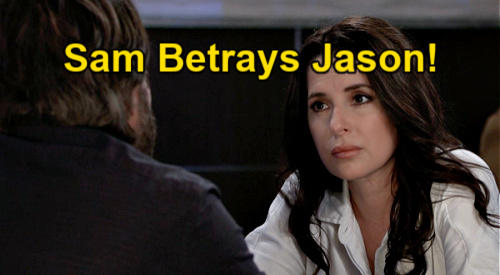 General Hospital (GH) spoilers tease that Sam McCall (Kelly Monaco) will find herself facing a tough decision and an even tougher task. GH fans know Sam suspected Jason Morgan (Steve Burton) had some sort of plan in motion during her recent visit to the hospital.

Jason didn’t want to offer details to give Sam deniability, but Sam offered a warning since Jason’s kids miss him enough as it is. Sam was concerned about the trouble Jason might land in – and more of it’s indeed on the way.

General Hospital spoilers say Jason will make his getaway from GH after shots are fired. The whole thing will turn into a disaster and will drag Britt Westbourne (Kelly Thiebaud) further into the mess, but at least Jason will be able to flee and will escape with his life.

During the week of May 10-14, Dante Falconeri (Dominic Zamprogna) will make a big career decision. It’ll involve his future at the PCPD, so it sounds like Dante will officially be back on the force.

Dante will apparently want to take charge of this fugitive case, so that’ll bring some tension with Sam initially.

However, Sam will make a big decision of her own – and it’ll be a surprising one. General Hospital spoilers say Sam will insist on helping with the Jason search. She’ll vow to help find Jason, so she may put her PI skills to good use and become a crucial part of the investigative team.

Of course, this seems like a betrayal under the circumstances. Sam knows Jason is innocent and that he could be in danger at Pentonville. If Jason is found and is returned to prison, he could be killed soon after.

In fact, this General Hospital escape plot is only going to anger Cyrus even more and would probably guarantee Jason’s demise upon his return to the slammer. Why will Sam be trying to send Jason back to his death?!

General Hospital spoilers say Sam will eventually end up having to change her strategy, so it’s possible she’ll come to her senses and protect Jason in the end. Nevertheless, it’s troubling that Sam will be so determined to help Dante and the cops hunt Jason down early on.

General Hospital fans will see some shockers and shakeups while Jason’s gone with Britt, so don’t miss the search and all the chaos it’ll bring. CDL will have other scorching General Hospital spoilers, news and updates to check out, so stop by regularly.