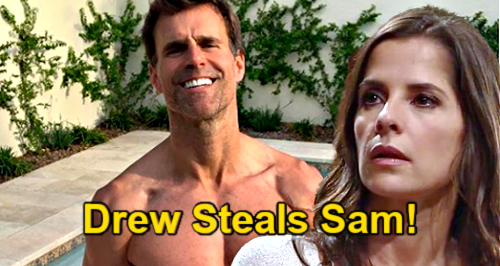 General Hospital spoilers reveal that it’s time for Sam McCall (Kelly Monaco) to find love again. Sam and Dante Falconeri (Dominic Zamprogna) have teetered between friendship and romance for a while now. Sam and Dante could decide to finally go all-in but as soap fans know, that’s when fate intervenes. How will Sam’s story be affected when Drew Cain (Cameron Mathison) returns to Port Charles?

GH spoilers reveal that months ago, Sam and Dante’s friendship seemed as if it was stepping into the romance zone. They have bounced from friendship to semi–romance and then pull back again. It’s been a cycle and there always seems to be some reason that they suddenly change gears.

Fans are divided between Sam and Dante moving from a friendship to a relationship. Even though some would like to see a love story, there are many more who think the two should stick to friendship.

Before Sam can move on, she has to be over her past. Even though she is the one that chose to end the relationship, it was due to Jason’s association with the mob.

It was simply becoming too dangerous for their family, so “JaSam” parted ways. A lot of fans thought they would reunite but that hasn’t happened.

It doesn’t look like it will anytime soon as Jason and Britt eventually find their way back together.

That means Sam will need a love interest as she can’t be alone forever. In order to get Sam’s heart ready for love again, she went through a Jason purge to get him out of her system.

General Hospital spoilers suggest that Sam and Dante could decide to just jump into a relationship. Soaps love to bring people together and have everything seem perfect.

Then, something happens to rip them apart. This is sometimes done to show fate can bring people back together no matter what. The other reason is so fate will intervene and put the character on the “right” path.

With Drew returning to Port Charles, one of his storylines will be centered on love. He has a history with Sam so the soap will probably tap into that.

Of course, it won’t be as simple as Drew showing up and immediately being put back with Sam.

There has to be a journey, obstacle, challenge or dilemma. With Sam and Drew, it just might be Dante that keeps them apart, but also brings them back together.