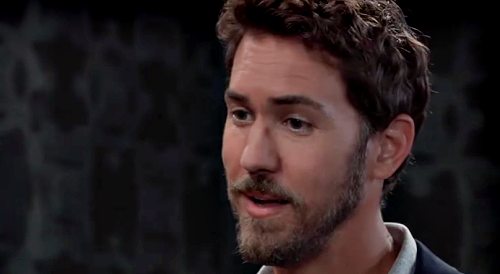 General Hospital (GH) spoilers tease that Sonny Corinthos (Maurice Benard) could get a chance at Peter August (Wes Ramsey) payback, which means this mob boss may want revenge when the threat resurfaces in Port Charles.

Sooner or later, Peter is bound to make his way back to PC – especially once he figures out Maxie Jones (Kirsten Storms) has been hiding Louise August (Harper and Scarlett Bloom) there all along.

Can you imagine how furious Peter will be once he realizes “Bailey Quartermaine” is actually Louise?

Peter will certainly go after his daughter, but he’s also going to want Maxie and all parties involved to pay.

That includes Brook Lynn Quartermaine (Amanda Setton) for helping Maxie pull this off – and it could also include Nina Reeves (Cynthia Watros) for keeping the secret.

Nina sent Peter to St. Lucia on a bogus lead and tried to arrange for him to be killed by Liesl Obrecht (Kathleen Gati).

Peter was angry enough without even realizing that Nina indeed knew where Louise was. He’s sure to be completely livid once he realizes the depth of Nina’s deception – and that could put a target on her back once Peter shows back up in Port Charles.

It was iffy on whether Sonny would even make it out of there alive as well.

There’s also the matter of protecting Brook Lynn and Nina once Peter’s back for revenge of his own.

It’s easy to imagine Sonny proving he’s a ruthless force to be reckoned with by bringing Peter down once and for all.

Even if Sonny isn’t the one to finally take Peter out, he could at least try!

Sonny has every right to want payback, so maybe a Sonny and Peter showdown could be in the works.

General Hospital spoilers say some exciting developments are ahead as Peter closes in on Louise.

CDL’s where you want to be for terrific General Hospital spoilers, updates and news, so check back frequently for more GH details.