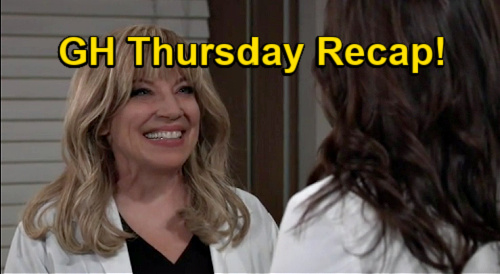 Anna asked Dante about Sonny Corinthos (Maurice Benard), and Dante reported that the authorities were still searching the river in New Jersey. Soon, the topic of Dante’s undercover work came up, and Anna fished for information about Dante’s release from the WSB and his doctor. “My doctor is dead, but that’s not news to you, is is Anna?” Dante asked.

Elsewhere in the hospital, Britt Westbourne (Kelly Thiebaud) told Kevin Collins (Jon Lindstrom) that what happened to Ryan Chamberlain (Jon Lindstrom) was out of GH’s hands now. Guards were present, prepping Ryan for his discharge and a transfer to another facility.

Liesl continued to walk along the hallway and later ran right into Britt, causing her to drop her papers. Britt was put off, but she quickly recognized Liesl’s perfume and unmasked her mother. Britt learned that Liesl had been released by the WSB and cleared of all charges against her. Britt was stunned.

Britt and Liesl went into an exam room and talked some more, and Liesl explained that the evidence against her had been fabricated. Britt wondered why Liesl was sneaking around, and Liesl said she was on a mission to expose Peter August (Wes Ramsey), whom she believed framed her and poses a risk to Maxie Jones (Kirsten Storms).

Over at the Metro Court, Maxie and Peter dined at a table, and Peter told Maxie that he’d do anything to have this life with her.

At another table, Elizabeth Baldwin (Rebecca Herbst) and Franco Baldwin (Roger Howarth) had dinner and talked about how they were going to treat the tumor aggressively and that Franco had Peter’s voice in his head.

Franco wondered if perhaps they shouldn’t go to Peter and Maxie’s wedding, but Elizabeth said that wasn’t an option. Meanwhile, over at the bar, Valentin Cassadine (James Patrick Stuart) approached Martin Grey (Michael E. Knight) wanting help with investigating what Jasper “Jax” Jacks (Ingo Rademacher) is up to.

Martin wasn’t in the mood and snipped at Valentin, revealing that his mother had been kidnapped. Valentin was stunned by this, and he offered to help. Valentin asked who kidnapped Martin’s mother, and Martin said that Jason Morgan (Steve Burton) had done the deed.

Franco then joined Peter for a chat while Elizabeth and Maxie were in the ladies’ room. Through their conversation, Franco spilled to Peter that he was getting some of Drew Cain’s (Billy Miller) memories back and that he heard Peter’s voice in his head. Peter looked very concerned about that.

Laura told Nikolas that Cyrus Renault (Jeff Kober) and Martin were his half-uncles, and Nikolas was shocked. Kevin then called Laura and asked her to come to GH and bring Ava and Nikolas with her – it was about Ryan.

At Jordan Ashford’s (Briana Nicole Henry) office, she looked through files at pictures of some of Cyrus’ victims – Dustin Phillips (Mark Lawson), Dev Corbin aka Dev Cerci (Ashton Arbab), and Lulu Spencer (Emme Rylan). Soon, Cyrus showed up to demand that Jordan do something about Jason.

As they discussed, Cyrus realized that Jordan had helped Taggert fake his death, and he ordered Jordan to produce his mother now. “Get her yourself,” Jordan said flippantly. Cyrus was horrified as Jordan told him to “go get Mommy yourself.” Jordan said that she was done, and Cyrus fumed that there would be consequences.

“Bring it on,” Jordan said, noting that Cyrus now knew how it felt to have a family member kidnapped and to feel helpless. Jordan ranted, saying how horrible it felt to know that your family was in the hands of someone else.

Jordan taunted Cyrus, saying that Jason’s family was under protection, and that if he kidnapped a Corinthos, then his mother would die. “The field is even, and I’m no longer wearing handcuffs,” Jordan said, getting right in Cyrus’ face. Later, Jordan got a call as she was looking over Sonny’s file, and she got upset and threw the file across the room.

Ava went into see Ryan and taunted him as he sat motionlessly in his wheelchair. Ava dug her fingernails into Ryan’s arm to make sure that he wasn’t faking. Ryan didn’t move but he appeared to be aware of what was going on.

In an exam room, Britt and Liesl continued their conversation about Peter. Liesl said that she has come to Port Charles to get proof that Peter set her up. Liesl said that Peter would sacrifice Britt in a heartbeat, and that she needed to be careful. Liesl and Britt hugged happily, and Britt agreed to keep her mother’s presence in town a secret.

Elsewhere in the hospital, Anna told Dante that she was concerned about him. Dante said that he didn’t know anything about Dr. Warren Kirk’s (Jamison Jones) death when Anna asked, and Anna said that she didn’t think that Dante was well. Dante got miffed and said that he was only interested in making sure Port Charles was safe, and he walked off.

Anna then found Kevin and wanted some information about Dr. Kirk. Kevin said that Dr. Kirk is a professional acquaintance, and Anna shared that Dr. Kirk had been murdered and worked for the WSB. Kevin didn’t know that, and he shared with Anna that Dr. Kirk’s background was in the military and psychological warfare. That interested Anna.

Near the elevators, Laura asked Nikolas to steer clear of both Ryan and Cyrus. Laura took off, and Nikolas found Ava with Ryan, who now had deep gouges on his arm from Ava’s fingernails. Guards came in and whisked Ryan off to the minimum-security facility, and when they took him into the hallway, Ryan smirked slightly.

Back at the Metro court, Dante arrived and sat a table alone gazing at Peter across the room, who was still talking to Franco. Franco said that he was hearing Peter’s voice in his head a lot, and that it was probably the result of the memory transfer. Peter looked upset as Franco said it was probably Drew’s memories.

That was a great episode of General Hospital – and don’t miss tomorrow’s episode! We’ll be sure to keep you up to speed on all the latest GH news and updates. Here at CDL, we’ve got you covered!