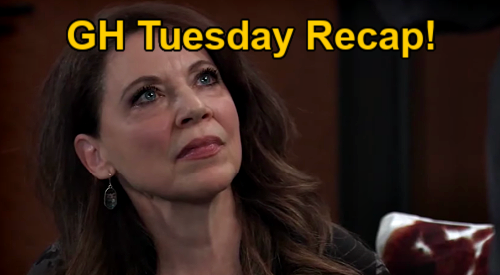 Franco pushed Liesl to treat the voices in his head, and Liesl suggested that Franco go to Kevin Collins (Jon Lindstrom) for hypnosis to recover the Drew Cain (Billy Miller) memories in his head. Liesl instructed Franco to watch out carefully for Anna Devane (Finola Hughes).

Soon, Jordan walked in, and Alexis considered changing her plea to guilty, but Martin stopped her. After Jordan left, Martin vowed to defend Alexis whether she liked it or not.

At the Metro Court, Cyrus Renault (Jeff Kober) approached Laura Collins (Genie Francis), who was bristly in response to his well-wishes about Dante Falconeri (Dominick Zamprogna).

Cyrus showed Laura a family photo of their father, his mother, himself, and Martin from back in the day. Laura assumed this was an attempt to tug at her heartstrings, and she said it wouldn’t work.

Over at another table, Maxie Jones (Kirsten Storms) fussed with Peter August (Wes Ramsey) over The Invader article about Franco, noting that it got Dante attacked by Alexis.

Peter insisted that he needed to warn people about Franco. After some talk about how far they’d come in their relationship, Maxie left to go see Dante at the hospital.

Back with Laura, she was still gazing at the family photo when Martin approached. Martin assumed that Cyrus sprung that picture on Laura to get her to find Florence Grey (Annie Abbott). Martin wondered if the technique worked. Laura said that she couldn’t make promises, but that she’d do what she could.

Over in another area of the restaurant, Peter met with a jeweler, who had the rings that Peter had selected for himself and Maxie. “Do they speak to you?” the jeweler asked. “They say til death do us part,” Peter said.

At the hospital, Anna and Kevin discussed Liesl possibly coming back to Port Charles. Then Elizabeth Baldwin (Rebecca Herbst) rushed up and laid into Anna about Peter’s article in The Invader.

Elizabeth said that she and Franco obviously couldn’t come to the wedding now, since it was open season on Franco. Anna was sorry for Peter’s actions, and Elizabeth fussed some more and then left.

Dante stayed mum. Soon, Alexis barged in the room, managing to get past the guard, to see if Dante was ok.

Dante was gracious with Alexis, and he urged Sam and Alexis to work things out between them. Alexis left, and Sam followed her out to the elevator.

Elsewhere, Elizabeth and Kevin were talking, and Franco walked up waning Kevin to help him figure out what Peter’s voice in his head meant. Anna happened to be walking by and overheard this.

Anna approached, and wanted to make sure that she heard that right. Elizabeth said that Dr. Warren Kirk (Jamison Jones) thought it might have to do with Drew’s implanted memories.

Elizabeth pulled Franco aside and blasted him, figuring out that he had obviously been in contact with Liesl.

Franco told Elizabeth that the WSB cleared Liesl and that she was treating him. Elizabeth insisted that they needed to focus solely on treating Franco’s tumor right now.

Back in Dante’s room, Liesl showed up to tell Dante that they needed to stop Peter before his wedding to Maxie, and that Anna must not know that she’s back in Port Charles.

Liesl clicked her pen and Dante said, “Complete the mission.” Liesl said that Peter and Maxie must never be allowed to say, “I do.”

Elsewhere in the hospital, Sam took Alexis to the AA meeting room, but Alexis wanted to bolt, saying that she needed a drink. Sam wondered how many people Alexis needed to hurt before she realized she needed help.

Anna and Kevin talked in another area of the hospital, and Anna said that there had to be a common denominator in this Franco/Dante/Dr. Kirk puzzle. Anna mused that it looked like Liesl was free, Dante was suffering from PTSD, and Franco was hearing Peter’s voice.

Kevin wondered if Anna would follow the evidence no matter where it led, and Anna said that she would.

Back in Jordan’s office, Cyrus ambled in, and Jordan said that if he was there about the search for Florence, then there was nothing she could do. Cyrus needled Jordan about her marriage falling apart, and Jordan fired back that it was none of his business.

Cyrus then offered something in exchange for finding Florence, saying that he could see to it that Marcus Taggert (Asante Jones) goes free.

Keep tuning in to General Hospital, so you don’t miss any of the action. Here at CDL, we’ll keep you informed on all the latest General Hospital spoilers, updates, and news. Check out our daily episode recaps as well!