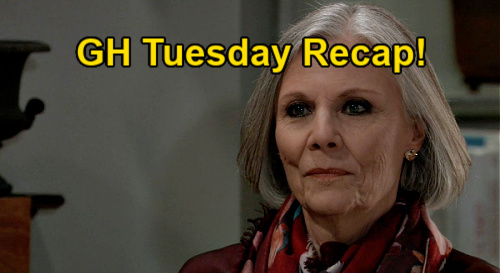 Valentin said that he hired Martin to represent Alexis in her DUI case. Alexis said that she was taking care of her defense herself, and Martin advised against it.

Martin then said that he knew the judge in the case, and that the judge always hands off his keys to a sober driver when he imbibes at the clubs.

Martin said that the key to Alexis’ defense was showing that Tracy Quartermaine (Jane Elliot) had a duty of care that night as the sober driver, and that she failed in that duty. Alexis seemed to accept this.

At the hospital, Jason Morgan (Steve Burton) and Britt Westbourne (Kelly Thiebaud) talked about Cyrus Renault (Jeff Kober). Britt revealed that she was studying the effects of Cyrus’ new pharmaceutical drug on rat brains, and Jason cautioned Britt against crossing Cyrus. Britt noted that she could take care of herself, and that she was going to see this through.

Britt also noted that she wasn’t her mother or her father. “Or your brother?” Jason asked. Elsewhere in the hospital, Sam McCall (Kelly Monaco) and Elizabeth Baldwin (Rebecca Herbst) talked about Franco Baldwin (Roger Howarth).

Sam was shocked to hear that Franco’s tumor was back, and she worried about his violent tendencies coming back.

Elizabeth told Sam that Franco’s tumor was inoperable and hat he was going to die, and Sam softened a bit. Through their conversation, Elizabeth learned that Franco had recently talked with Jason, and that Jason had warned Sam about Franco. Elizabeth rushed off to head home and talk with Franco.

At the Q mansion, Olivia Quartermaine (Lisa LoCicero) asked Tracy what really happened on the night that Alexis ran her car off the road. Tracy made up a story about Alexis saying disparaging things about Olivia, but Olivia didn’t buy it.

Just then, Ned Quartermaine (Wally Kurth) appeared as he was getting things ready for Leo Falconeri’s (Aaron Bradshaw) adoption celebration.

Ned left and Olivia confronted Tracy in her lie, saying that she and Sam checked with the security company and the alarm in Alexis’ house wasn’t touched that night. Tracy tried to worm her way out of addressing this, then she finally alluded to the fact that she was framing Alexis to help someone else.

“Me?” Olivia asked. Tracy asked Olivia if she was sure she wanted to keep pushing the issue. Ned and Sam walked into the room, and Olivia started thinking.

Olivia remembered a bunch of past conversations with Alexis, Ned, and Tracy, and then she started realizing that something must have happened between Alexis and Ned.

At Elizabeth and Franco’s house, Cameron Webber (William Lipton) was shocked to hear from Franco that a letter came to him from Stanford University. As Cameron was opening the letter, Franco heard Peter August’s (Wes Ramsey) voice saying, “Please meet Drew Cain” in his head.

Cameron read the letter and offered congratulations on his admission to the university.

Cameron then told Franco that while he was happy about the admission, he didn’t want to tell anyone about it yet, even Elizabeth. Franco was disappointed, and Cameron went upstairs as Elizabeth came home. Elizabeth was upset and accused Franco of lying to her.

Finally, over at Crimson, Jasper “Jax” Jacks (Ingo Rademacher) and Nina Reeves (Cynthia Watros) hugged and kissed after Jax’s declaration of love. Jax apologized for not saying it sooner, and Nina was oddly quiet and hesitant.

Nina said that she had both longed for and had been afraid of Jax saying those words. After a bit more back and forth, Nina finally said that she loved Jax, too, and the couple embraced warmly.

There’s certainly a lot going on right now on General Hospital, so stay tuned! Stick with the ABC soap and we’ll be sure to keep you informed about all the latest General Hospital spoilers, updates, and news.