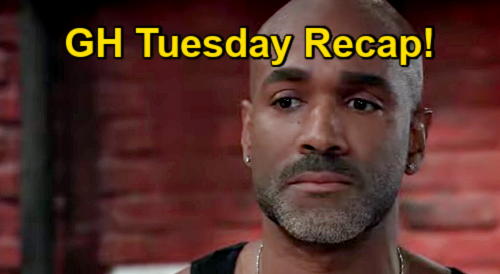 General Hospital (GH) spoilers recap for Tuesday, January 26, reveal that Curtis Ashford (Donnell Turner) was punching the bag at the gym when some guy needled him about hogging the equipment.

Portia Robinson (Brooke Kerr) broke up the would-be fight between the men, then Curtis lamented to Portia about Jordan Ashford’s (Tiffany Daniels) pattern of lying.

Portia wondered who Curtis saw standing by his side in the future, and Curtis said that it was Jordan. “Then you’ve already decided,” Portia said. Curtis thanked Portia for being a good listener.

Meanwhile, over at the Metro Court, Jordan and Anna Devane (Finola Hughes) had tea. After some small talk, Jordan started lamenting about her history of lying to Curtis.

Jordan told Anna the story about Marcus Taggert (Asante Jones) being alive and how Curtis found out. Jordan said that the Taggert lie just seemed like the last straw for Curtis.

Later, Curtis showed up for takeout from the Metro Court, and Anna told Jordan that Curtis was over there and that she should go fight for him.

Jordan approached Curtis, hoping that they could spend some time together at home, but Curtis flatly refused, saying that it was killing him not to be able to trust her.

At the hospital, Jackie was there getting Sasha’s medical records when Hamilton Finn (Michael Easton) overheard and questioned whether an interview was a good move for Sasha.

Talk quickly turned to the issue of Chase’s paternity, and Jackie didn’t want to get into it right now.

Finn pushed the issue and learned that Jackie never did a DNA test, and that Finn was born slightly more than nine months after she married Gregory Chase (Gregory Harrison). “Doesn’t that bother you?” Finn asked.

Jackie said no, and that Finn had disappeared from their lives and that Chase had a dad who loves him.

Finn and Jackie continued arguing as they walked toward the elevator. Anna walked up nearby and overheard the tail end of their argument as Jackie told Finn that she wouldn’t unravel Chase’s world.

Jackie took off, and Anna approached Finn, who asked her to help him get the truth.

At the Quartermaine mansion, Willow Corinthos (Katelyn MacMullen) and Michael Corinthos (Chad Duell) talked about Willow moving out, and Willow said that she had an appointment to look at an apartment later.

Willow left, and Sasha arrived to tell Michael about her interview with Jackie, and that she’d try to keep Michael and Willow out of it.

Michael wished Sasha well and indicted that he wasn’t at all sorry that he had loved her. Sasha took off, and Michael looked conflicted.

Across town at Wyndemere, Carly Corinthos (Laura Wright) got startled when Nikolas Cassadine (Marcus Coloma) entered the playroom and interrupted Carly’s attempt to switch out Avery Corinthos’ (Ava and Grace Scarola) necklace with a decoy.

Carly held one necklace in her hand while the other fell to the floor. Nikolas asked Carly what she was doing and picked up the necklace on the floor. Nikolas angrily marched Carly downstairs, where Ava Jerome Cassadine (Maura West) realized that Bobbie Jones (Jacklyn Zeman) was a distraction for Carly.

Carly lied and said that she wanted Avery’s necklace so she could have a copy made for Donna Corinthos (Ella and Emma Hulen). Neither Nikolas nor Ava bought that story, and Ava threw Carly and Bobbie out.

Later, Ava told Nikolas that she wasn’t concerned about why Carly wanted the necklace, but as she hugged Nikolas she gazed at the necklace.

At Jasper “Jax” Jacks’ (Ingo Rademacher) house, Nina Reeves (Cyntha Watros) and Jax made love, then were interrupted when Carly and Bobbie dropped by unannounced.

Bobbie and Nina talked in the living room, while Carly and Jax went out on the terrace and Carly told Jax the story about the necklaces.

Carly revealed that she had no idea whether Nikolas had picked up the real necklace or the decoy. Carly lamented about her plan gone awry, and Jax said that he was worried about Carly. Carly broke down in Jax’s arms as Jax told her to call him next time before she acts.

Back at the gym, Willow found Chase working out. Chase told Willow about Sasha’s upcoming interview, and Willow disclosed that she and Michael had signed the annulment papers.

Chase could barely hide his glee. Later, Portia and Willow discussed Willow’s decision to enter nursing school, and Chase overheard. Chase hoped there was room for him in Willow’s new life.

Willow then went back to the Q mansion, where she talked with Michael briefly about Sasha’s interview. Both Michael and Willow worried about how Sasha would fare during the interview, and they hoped that the whole thing wouldn’t blow up in Sasha’s face.

That was a great episode of General Hospital, and there’s plenty more coming tomorrow, so stay tuned! Stick with CDL for all the latest General Hospital spoilers, daily episode recaps, and news.