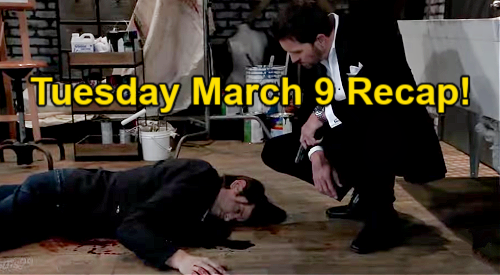 General Hospital (GH) spoilers recap for Tuesday, March 9, reveal that Maxie Jones (Kirsten Storms) fumed at Anna Devane (Finola Hughes) in her room at the hospital. Anna divulged that she had made “arrangements” for Peter August (Wes Ramsey) so that he’d never marry Maxie, and Maxie was outraged.

Spinelli told Jason where Franco Baldwin (Roger Howarth) was, then he hung up and Robert Scorpio (Tristan Rogers) joined him and told him that he needed to help Maxie put her life back together.

At the nurses’ hub, Elizabeth Baldwin (Rebecca Herbst) got updates about the double wedding and about all of Peter’s crimes from Sam McCall (Kelly Monaco). When Elizabeth heard that Franco had been looking for Jason, she took off hurriedly to go find Franco.

In an exam room, Jordan Ashford (Briana Nicole Henry) got updates from Robert about how he had suspicions about Peter this whole time.

Meanwhile, back in Maxie’s room, Maxie told Anna to leave and never come back, as Britt Westbourne (Kelly Thiebaud) arrived to examine Maxie and the baby.

At Elizabeth and Franco’s house, Scott Baldwin (Kin Shriner) arrived to visit with Cameron Webber (William Lipton). Cameron wanted Scott’s help in drawing up a contract listing all the things that Franco has to live for.

At Franco’s art studio, Peter and Franco struggled over the gun, which went off, shooting Franco in the chest. Peter taunted Franco while he was laying on the ground, apparently dying.

A few moments later, Peter was gone, and Jason arrived, finding the door ajar and Franco laying in a pool of blood.

Soon thereafter, Elizabeth arrived and immediately tended to Franco, telling him that it was going to be ok and asking him to open his eyes. Franco gasped for breath as Elizabeth told him that they had a lifetime together.

Back at the hospital, Anna and Mac Scorpio (John J. York) talked on the staircase. Mac was very upset that he never saw the signs that Peter was a criminal, and Anna offered support.

Mac then caught up with Jordan and Robert in an exam room, just as Jordan got the call about Franco’s shooting.

Out in the hallway near Maxie’s room, Valentin and Alexis were talking when Peter showed up to see Maxie. Valentin said that Peter shouldn’t be there, and that Jason knew everything.

Peter said that he wasn’t scared and wasn’t going to run. Peter insisted on seeing Maxie, to Valentin’s chagrin.

Meanwhile, inside Maxie’s room, Anna came back in, and Maxie didn’t want anything to do with her, saying that they were done. Sam and Spinelli came in for a visit, and Maxie apologized to them both, but they said that no apologies were necessary.

Just then, Peter yelled from outside the room to Maxie, and Maxie told Spinelli and Sam that she’d see Peter, but she needed a moment first.

Outside Maxie’s room, Peter continued to insist on going in, but now both Valentin and Anna stood in his way. Maxie yelled out that it was ok for Peter to come in, and Peter entered the room hastily.

Back at Franco’s art studio, Jordan arrived to find Jason outside the door. By this time Franco’s body was on a gurney, and Elizabeth told the medics that she needed a moment with Franco.

Elizabeth tearfully asked Franco not to make her let go of him and not to leave her and the boys.

Elizabeth hugged Franco, and Jordan quietly asked Elizabeth what happened. Elizabeth looked up from Franco’s body and glared at Jason. “You did this. You killed him!” Elizabeth accused.

That was a great episode of General Hospital, and there’s plenty more coming tomorrow, so stay tuned! And be sure to check CDL as often as you can for the latest General Hospital spoilers, updates, and news.