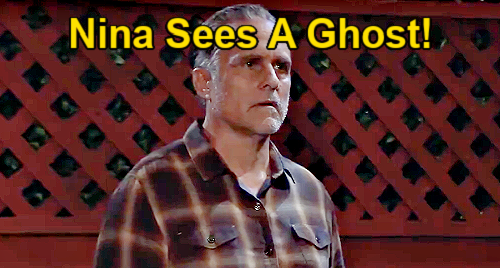 General Hospital spoilers reveal the preview for August 23 to 27 tease that Nina Reeves (Cynthia Watros) sees a ghost. We already know Maxie Jones (Kirsten Storms), but an unwelcome visitor will make an appearance in Nixon Falls later in the week. Meanwhile, Sonny Corinthos aka “Mike” (Maurice Benard) wants an explanation.

Sam turned to Curtis Ashford (Donnell Turner) for help. This week, Sam is even more convinced that Drew is alive and nothing is going to change her mind.

Meanwhile, Drew is still being held captive and appears to be hallucinating. In the preview, his eyes are wide with disbelief as he “sees” Scout Cain (Ella Ramicieri).

Next in the weekly preview, we see Jason Morgan (Steve Burton) having a conversation with Carly Corinthos (Laura Wright). Carly has been worried that she’s putting too much pressure on him.

However, they are now dealing with the fact that they have to get married and have the ceremony quickly. In the clip, Jason says, “we all make choices and we gotta live with them.”

Nina Reeves Sees A Ghost – Is It Ava?

General Hospital spoilers confirm that Nina gets an unexpected visit from Maxie. Nina orders her to leave and it seems that she does return to Port Charles.

Later in the week though, Nina gets another unexpected guest. This mystery person is unwelcome and Nina’s eyes are wide with bewilderment… as if she is seeing a ghost.

There are a lot of theories on who this mysterious visitor could be and what it means for Nina’s secret about Sonny.

However, it could be Ava Jerome Cassadine (Maura West) as she recently mentioned leaving Port Charles for a while. Of course Peter August (Wes Ramsey) is a good candidate since he’s supposed to be dead (see a ‘Ghost’) and there is a visual of a man with hands and legs that look like they could be Peter’s.

Speaking of Sonny, the end of the weekly preview shows him walking in and seeing the look on Nina’s face. Sonny says that she looks as if she’s seen a ghost.

Knowing Sonny, he is going to want an explanation. What is Nina going to say and how will Sonny respond?

Will this mark the beginning of Sonny getting his memories back and his return to Port Charles?

If so, will he get there in time to stop Jason and Carly’s wedding? We will just have to keep watching the ABC soap to find out.

“It looks like you saw a ghost.” #GH pic.twitter.com/wKilv8ORn4