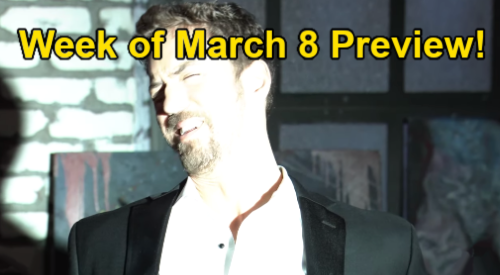 General Hospital (GH) spoilers tease that viewers are in for a fantastic week of March 8-12 on the ABC soap, as the fallout from the disaster double wedding continues to rain down on various Port Charles residents.

As GH viewers know, neither couple involved in the double nuptials ended up getting married, and now Maxie Jones (Kirsten Storms) is in the hospital for observation after a serious stress reaction.

The new GH preview for the week of March 8 is out, and it first shows Elizabeth Baldwin (Rebecca Herbst) who has apparently arrived at the Metro Court ballroom for updates.

It looks like Sam McCall (Kelly Monaco) will fill Elizabeth in on what’s been going on, and she’ll probably relay that Franco Baldwin (Roger Howarth) was urgently looking for Peter August (Wes Ramsey).

It seems that Valentin will make a beeline for Jason directly from the wedding, possibly with a favor in mind.

“What do you want?” Jason asks Valentin. “Closure,” Valentin says ominously in the preview video. Could Valentin be asking Jason to eliminate Peter once and for all, as opposed to taking care of the matter himself?

Next, the GH preview shows Maxie lamenting to Anna Devane (Finola Hughes) about everything she’s just learned about Peter and his crimes. “The man I love is a lie,” Maxie wails to a tearful Anna.

Something tells us that Anna’s going to have some explaining to do to Maxie about why it took so long for her to spill the truth about Peter.

Finally, the new GH preview shows Peter being held captive by Franco. Peter is shown waking up all confused with a bright light being shined in his face by Franco. None of this looks good, as it would seem that Franco’s dark impulses are returning.

After all, Franco violently bashed Peter over the head with a tire iron, but now the question is what’s going on in Franco’s head.

GH viewers will remember that Franco told Sam at the end of last week to tell Jason that “I’m me,” which could mean one of a couple things. Franco could be indicating that he’s Drew Cain (Billy Miller) and is looking for revenge on Peter for abducting him back in Afghanistan.

But it’s also possible that Franco could have been referring to the fact that he’s still Franco and is back to his serial killer ways.

That would mesh with Franco’s violent attack on Peter and his calm, detached demeanor as he did so. “As it is written, so shall it be,” Franco tells Peter in the preview video, which certainly sounds like the old, serial killer Franco!

GH viewers are going to have to tune in this week to see how things unfold, but suffice it to say, Peter looks to be in desperate need of a rescue. And given GH buzz that Roger Howarth may be on his way out, you never know what could happen here.

This week is going to be on fire, so stay tuned! We’ll be sure to give you updates as more GH news comes in. Keep checking back with CDL for the very latest General Hospital spoilers and news.

“As it is written, so shall it be.” #GH pic.twitter.com/gJ4SBvxaJT