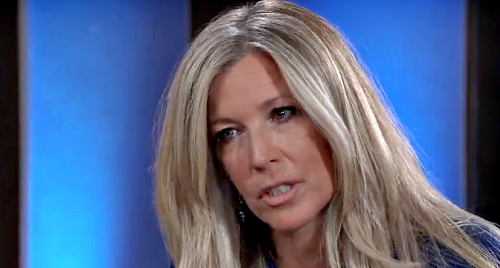 General Hospital spoilers preview for the week of November 8 reveals an explosive week for several major characters. Carly Corinthos (Laura Wright) puts a friendship on the back burner to save her marriage. Sonny Corinthos (Maurice Benard) uses his power and Peter August (Wes Ramsey) chooses who lives and who dies.

As Drew and Jason face each other, Peter pits the men against each other. Peter says, “One brother down and one to go.”

Drew is seen shacked with a chain and lying motionless on the floor. In a hushed voice, Jason yells Drew’s name. However, is Drew dead or is it just an act to fool Peter? Plus, will Peter actually get away with yet another brutal crime or is there a way or can Jason and Drew be saved?

Carly has a conversation with Diane Miller (Carolyn Hennesy) and explains her dilemma. Carly decides that in order to protect her marriage to Sonny, she has to let go of her friendship with Jason. Carly’s choice might come a little too late, though.

General Hospital spoilers reveal that Sonny and Nina Reeves (Cynthia Watros) have a conversation. The two are discussing Nina’s pending criminal trial. If convicted, Nina could end up going to prison.

Even though Sonny is the victim in the case, Michael Corinthos’ (Chad Duell) revenge scheme might not pan out the way he envisioned. The way that Nina is positioning herself at the bar along with her facial expression and tone of voice, it’s clear she is being flirtatious.

Standing with purpose and sending a message with his body language, Sonny tells Nina what he is going to do. When Nina asks coyly if Sonny is going to use his power to get her out of going to prison, he replies, “They have no idea what I can do with my power.”

So, the question is what exactly is Sonny going to do? Is he really going to help Nina stay out of prison or does he have something else in mind? Let us know your thoughts and remember to keep watching the ABC soap to find out what happens next.

“One brother down… and one to go.” #GH pic.twitter.com/py8XuvBbx6