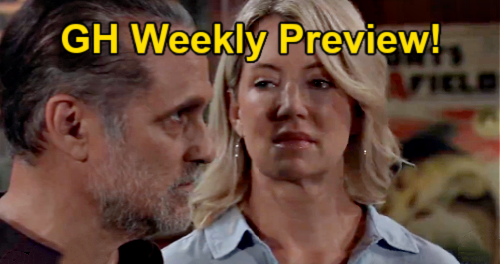 General Hospital spoilers reveal the weekly preview for September 6 to 10 has been released. The narrator teases “when you remember who you are” and Sonny Corinthos aka “Mike” (Maurice Benard) is featured. So, it’s safe to assume that Sonny’s memories finally return. Plus, Nina Reeves (Cynthia Watros) will have a horrifying encounter and a tragedy is teased.

The preview is titled “Be Careful” and that’s exactly what we hear when the clip begins. Jordan Ashford (Briana Nicole Henry) tells her ex-husband to be careful. Then, Curtis Ashford (Donnell Turner) tells her to also be careful.”

As fans already know, the investigation into Drew Cain (Cameron Mathison) is underway, as is finding out who killed Naomi Dreyfus (Gigi Bermingham).

These two cases are connected and Drew is going to attempt another escape. Whether Drew succeeds or not remains to be seen, but he needs to come to Port Charles at some point.

Later in the preview, Curtis is in a physical altercation with a man. On Twitter, the official GH account inserted a broken heart emoji with the preview, so it might mean tragedy for one character.

GH spoilers reveal that Sonny and Nina are in the preview next, as is Carly Corinthos (Laura Wright). Nina talks to “Mike” about what they have together could collapse.

Right after those words are spoken, Carly appears with a shocked look on her face. In her hand is a bottle of champagne, presumably for her wedding reception.

In the next scene, Nina is happily striding through the Tan-O when her facial expression suddenly changes. Nina faces someone she was not expecting and all that is seen in the clip is a jacketed arm.

The build is stocky, so it’s clearly a man. It is also confirmed that Jasper “Jax” Jacks (Ingo Rademacher) confronts Nina this week, September 7-10.

It’s not clear if Jax is the man in the jacket, but we are going to say no.

Nina would be panicked by Jax’s arrival, but she wouldn’t be scared of him, which is what the look on her face suggests. The narrator asks, “have they reached the limit?”

So, Trina is going to want to get to the truth, especially since Ava Jerome Cassadine (Maura West) is being affected.

General Hospital spoilers reveal Trina’s mom, Portia Robinson (Brook Kerr), is slowly walking down in a cellar or basement. Portia is holding her phone with the flashlight glowing, so she’s either looking for something or perhaps hears someone down there.

Then, Jordan quickly swings the door open and looks down the steps, but no one is there.

So, this doesn’t look like good news for Portia. We will have to keep watching the ABC soap to find out what happens next. Which storyline are you looking forward to the most?

Be sure to catch up on everything happening with GH right now. Come back often to CDL for General Hospital spoilers, news and updates.