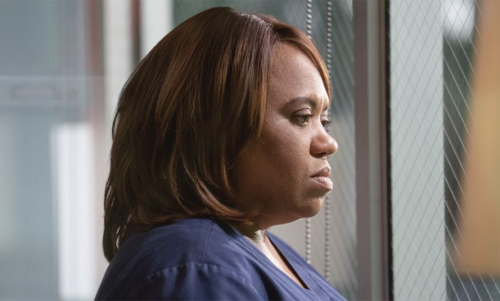 Maggie gives Winston hospital privileges and they work together to treat an uneasy patient; Jo, Link, and Jackson play an unconventional drinking game.”

In tonight’s episode of Grey’s Anatomy, the hospital is in mourning. They lost one of their own. Dr. DeLuca was murdered while stopping a known sex trafficker and so he died a hero, but that doesn’t stop the rest of the hospital from missing him and they were all grieving one way or another. Hellmouth refused to openly grieve. She didn’t want to be a part of his video memorial and she didn’t want to cry with Schmidt.

She simply wanted to be left alone. Schmidt couldn’t understand because he wants company when he’s hurting and he’s hurting now. He’s also blaming himself. He was on DeLuca’s case and he took himself off of it because he had been feeling guilty about something else. And so Schmidt’s go-to was to feel guilty even when there was no call for it.

Teddy felt guilty as well. She was one of two surgeons that worked on DeLuca and he still died. Teddy and DeLuca had been closely working together because he was assaulted. They were both working in the Covid-19 department and so life without DeLuca got really dark for Teddy. She started talking to Meredith in her coma just to cope.

Teddy begged Meredith to come back to the land of living and Hayes overheard her. He had been sent to the department to help. Bailey was the one to reassign and it seems Bailey had a lot to say. She was going to conduct an official investigation into DeLuca’s death. She wanted to know where the doctors went wrong and what could have been done to save him.

Bailey was doing this because she was hurt. She was in mourning too. She also believed that if she had been told sooner about his condition, that she could have done something to save DeLuca. DeLuca was her protégé. Bailey cared for him. She helped him get help for his medical condition and so she doesn’t think he should have been kept in the dark.

Richard waited until there was nothing she could do before informing Bailey that DeLuca was a patient. She never even got the chance to say goodbye nor did she witness his surgery. That’s why she’s lashing out now. The others were lashing out, too. Link and Amelia were struggling with DeLuca’s death because they didn’t know how to tell the kids and so Link started drinking.

Link is not an alcoholic. He only drinks sometimes and he hides bottles not because he’s ashamed. He does it so that it doesn’t tempt Amelia. Amelia is a drug addict. She’s not allowed alcohol and that’s the only reason Link was hiding his drinking. He was just trying to be a good guy. He thought he was protecting Amelia and instead she got angry at him for hiding his drinking. She thought it was a sign of something worse.

She wanted to speak to him about and he didn’t want to discuss it. Link left the house. He left it for the first time in months and he took the whisky bottle with him. Link went to Jo’s. He interrupted her and Jackson. Link apologized to them both about it because he knows about their relationship. He thinks they’re lucky that they get to do no strings attached thing.

Link wasn’t so lucky. He loves Amelia and he loves their son and his nieces and nephew. However, sometimes it gets to be too much. Link losing a friend also didn’t help and that’s why he snapped. He needed to able to drink to forget his problems. He went over to Jo because he wanted to daytime drink with someone and she was such a good friend that she was up for it. Jo also wanted to talk.

Jo, Link, and Jackson played a drinking game at her loft. They were drinking as Meredith was enjoying her faux beach. She envisioned herself on a beach during her coma and she saw people she lost. She saw DeLuca. She saw George. She even saw Derek. She saw him again tonight. She wanted to run to him and hold him and he told her that he couldn’t do it for her. She has to do it herself.

It was her beach after all and the decision between life and death was up to her. Meredith wanted to be with Derek but she didn’t want to give up on their children and so she was stuck in-between. The doctors in the outside world tried to wake her up. Teddy tried several methods on Meredith and nothing happened. She stayed in the coma on the ventilator.

Meredith overheard Hayes speaking to her. Hayes was telling her that her kids call on a tablet and that they watch her sleep as they talk to her. Hayes told her all about how her kids are doing. He also told her that the kids needed her to fight and that the hospital couldn’t take any more bad news. She needs to wakeup. Hayes told her needed to wake up and so that’s what she did.

Meredith left the beach and she returned to the real world. For a brief time. She came back upon hearing Hayes’s voice and then she left again because she wanted to be with Derek at the beach. The hospital meanwhile held a memorial for DeLuca and it had been hard on everyone. Bailey wasn’t even sure she wanted to go. She insulted both Teddy and Owen by accusing them of making mistakes. She carried out an investigation and it proved that the doctors did everything possible. And DeLuca’s death wasn’t anything they did.

Hellmouth later grieved. She’s gone two months without physical contact and so Maggie pressed her back against Hellmouth’s back. It was small but it was enough. Maggie returned to the hospital to help her through her loss and she brought along Winston.

She gave him special privileges in her department because she had needed to be around someone who cares for her. Together they treated a patient that was worried about the disease and was freaking out and Maggie was able to connect to the patient because she also lost someone. It wasn’t Covid but mourning DeLuca was something they all had to do together. Bailey showed up at the memorial. She told Richard there that she needed to take some time off.

Bailey lost both her mother and DeLuca in a short amount of time. She originally thought she should work through her pain and now she realizes that she has to take some time for herself. So, Bailey was leaving Richard in charge. He already put together the memorial for DeLuca and everyone showed up. DeLuca’s sister Carina even showed. She and everyone else cried when they showed DeLuca’s video entry in the intern program. He had been so proud about getting to work with his heroes and now he’s gone.

And his death seems to have broken Teddy because she had a mental breakdown.