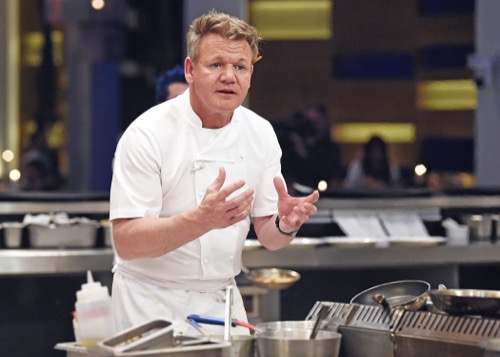 The cooks all gather the next morning in the kitchen with Gordon. Today’s challenge is about surf and turf. They are not going to be cooking surf and turf, they are going to be tasting it. The first team to identify six proteins correctly wins the challenge. The men have to beat 8 minutes and 46 seconds. The red team wins, the blue team will have to shell by hand, crab, for their punishment. They need to shell enough crab for 200 crab cakes. The red team is having fun in the sun, they are gone surfing. The team is discussing the ramifications if they lose at the dinner service.

Hells Kitchen opens for dinner service. Former NBA All-Star, Jerome Williams is in the dining room. Orders are already coming in. The red kitchen is off to a smooth start. The blue kitchen is out for redemption. Marc is on apps with Cody. Adam has wanted to do fish for a long time and tonight is his time to shine, and he doesn’t, he burns the scallops. Adam is embarrassed but finally comes through. The red team has already moved on the entrees. Syann is feeling good on her team, everyone is communicating and she hopes that they continue to do well. Syann burns one of her salmons, puts another one on and it is perfect. Gordon calls all the red team to the pass, he gets upset because nobody is ready to bring their items to the pass and a protein is brought up. Gordon then goes over to the blue team to see how they are doing. Amber is on the blue team and it is her time to shine. The red team makes the same mistake twice and Gordon’s patients are getting really thing. On the blue team, Gordon praises Amber for her protein, he says it is the best he has ever seen.

All of the red team’s proteins are horrible, Gordon throws them out of the kitchen and tells them to figure out which two cooks are going to be put up for elimination. Looks like they are going to put up Syann for what she did on the fish station. Nobody else thinks they should go up.

Gordon tells the blue team it is one of the best dinner services every in the kitchen. The red team tells Gordon that Syann is the first nominee and the second is Kori. Gordon says that is bullshit, he asked them for honesty and they can’t even give it. He says the worsts cooks were Syann and Jordan. Jordan says she has more fights, there was a miscommunication between everyone. Syann says she just had a rough shot. Gordon asks Syann if she is better than Jordan, she says yes. Gordon says the theme of the night is accountability. Jordon goes back in line, Syann is going home. Gordon tells her to keep her head up and don’t give up.

She thanks Gordon and her team, she says she has learned so much. Although she may not be ready right now, she learned a lot and she is proud of herself. Gordon tells the red team if they thought Kori should have left tonight, then they are dreaming. Adam is happy, he thinks the red team is weak and looks forward to knocking them off one by one. Jordan says she is looking forward to showing Gordon that she deserves to be there.