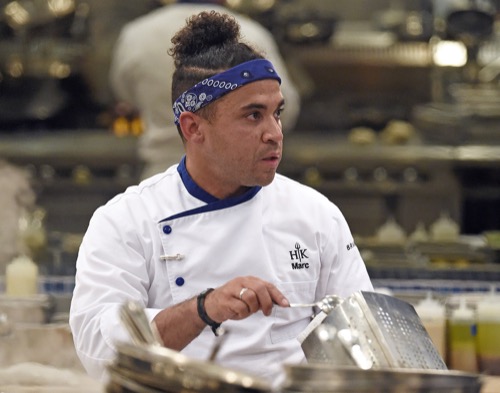 In tonight’s episode of Hell’s Kitchen, Marc is upset, he tells Cody that if he keeps sending him up, he is going to keep fighting. Amber tries to calm them down, Declan as well. The red team is finding the disagreement between Marc and Cody hilarious.

Time to get in front of Gordon, he tells them that they are all talented and he wants them to meet an up-and-coming chef, Seth Grabel. He has prepared one of his specialties, a burger. But Seth is not a protégé, he is a magician. He turned a deck of cards into tricks and Gordon says the chefs can take simple ingredients and make a masterpiece. Each team will be responsible for five gourmet burgers. But first, they have to play 52 card pickup, but it looks more like a 500 card pickup. It is actually ingredients written on the cards and they have to make them up with the proteins.

Gordon tells the red team that they are going to be the biggest kids in the sandbox; they will be crushing cars. Meanwhile, the blue team will be working with 500 pounds of potatoes.

The red team arrives at Dig This, they will be crushing cars. In the kitchen, Amber tries to speak to Marc but he won’t respond, he says he is not going to entertain amateur hour. During lunch, Gordon gives the blue team their burgers, pureed in milkshake glasses. Everybody drinks it, but Amber has trouble keeping it down. The red team is back and they rub it in with the blue team.

Time to prep for dinner service, Gordon comes into the kitchen. He says tonight he is determined to have a great service. He is giving the teams the chance to make the decision on who handles the stations. Hell’s Kitchen is opened. There are two chef VIP tables, one with season twelve winner Scott Cummings and the other with season seventeen winner, Michelle Tribble, along with a bachelor party whose meals will be split between both kitchens.

The blue team doesn’t have a good start, Marc’s risotto is not seasoned. It is thirty minutes into dinner service, Gordon tries the risotto a second time and says it is disgusting. Marc is called out of the kitchen with Gordon, he tells him to get a grip quickly, it is a warning. Marc says he won’t be broken, he will keep on pushing.

Nicole’s meat is exceptional, picture-perfect. Declan cooks the lamb and it is raw, Amber says he is in over his head. Yet, Amber knew she was stronger on the meat station and she gave it to Declan. Gordon calls Nicole out of the kitchen, he tells her that he thinks about her resume and she is cooking in a different league. Her transformation has been extraordinary. He tells her to keep it going, she is amazing.

Things are going bad in the blue kitchen, Amber volunteered for the fish station and she is also failing miserably and serves raw halibut. Gordon is pushed over the edge; he tells the blue team to leave the kitchen and choose two people who are going up for elimination.

The red team steams ahead, filling the dining room with entrees. Gordon thanks them for rising to the occasion. Declan asks Amber why she took fish, she says she needed another night on it, and he needed another night on meat. She says she worked her ass off, and she doesn’t deserve to go up. Marc wants Declan and Amber to go up, raw lamb and raw halibut with timing issues. Cody says Marc is going up 100%, he wants him to go home. Marc gets upset and walks out.

Time to face Gordon, Cody says Marc is nominated because he had to be re-taught. The second nominee is Cody, he wanted to be the voice of the team and he is willing to fight to stay in the kitchen. Marc says he is being sabotaged; Declan says no way. Then Gordon tells Marc to give him his jacket, he is not ready to be the chef of Lake Tahoe. Gordon tells the blue team that their weakest link is gone and can no longer be their excuse. Cody is thrilled, he is so happy that Marc is gone.