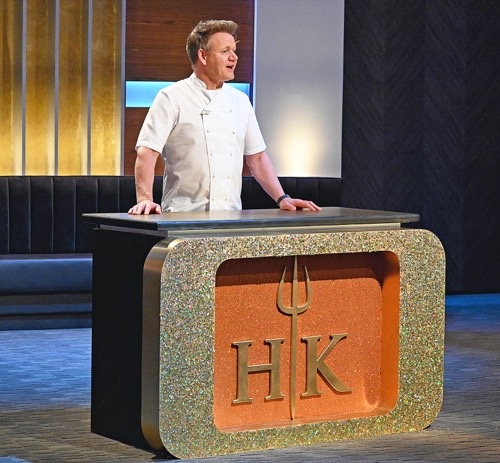 Tonight on FOX their Gordon Ramsay culinary competition series Hell’s Kitchen airs with an all-new Thursday, March 18, 2021, season 19 episode 11 and we have your Hell’s Kitchen recap below. On tonight’s Hell’s Kitchen season 19 episode 10 episode called, “There’s Something About Marc,” as per the FOX synopsis, “The remaining seven chefs play a game to unscramble the letters of key ingredients, after which they can choose to keep the ingredient for the next cooking challenge, or pass it to the other team as sabotage.

Later, Hell’s Kitchen hosts a VIP charity night, during which the chefs serve the Sarah McLachlan School of Music and the Chris Long Foundation.”

In tonight’s Hell’s Kitchen episode, now, the continuation of Hells Kitchen, Chef Gordon tells the rest of the blue team that now that your weakest link is gone, he is not their excuse anymore. Now that Marc is gone, Amber thinks there is a target on her back.

Cody and Mary Lou are so cute together, they are playing cards and flirting with each other. Gordon asks the chefs to meet in the kitchen, it is time for a challenge, “Spells Kitchen.” This challenge is designed to see which chefs can think quickly on their feet. There are ingredients scrambled and they have to guess what it is.

The person who answers correctly gets to decide to keep the ingredient for their protein or give it to the opposing team. Mary Lou does very well, so does Amber. The red team is sabotaged with having to use pineapple with their halibut, Amber has a chance to change the pineapple for avocado and she doesn’t do it which causes Declan to be suspicious.

The blue team’s reward is to dive into an amazing pool at the lake, they will swim, relax and enjoy cocktails with an all-American BBQ poolside. And, there is a treat waiting for the blue team in the dorm. The red team will prepare six hundred tuile cookies by hand. The blue teams find Vitamix blenders in their dorms.

The red team is making the cookies and burning their fingers because the dough has to be rolled when they are hot.

Chef Gordon tells the chefs that Hells Kitchen is closed to the public so they can support two remarkable charities. The red team is cooking for the Sarah McLachlan School of Music and the blue team for the Chris Long Foundation. Gordon expects perfect service from both teams.

Nikki is doing the scallop dish which is the first course, she wants it to go off without a hitch. The red team puts out the scallops and counts wrong, they are short two plates. That entire first course did not go the way they wanted it to.

Amber had one bad night at the fish station, she does not want that again. Meanwhile, Cody is not happy that Amber is not working with him and Declan, she just wants to work alone.

Both tables have had two courses, it is on to the steak. Declan gets called out by chef Gordon because some of his filets were too seared. On the red team, Jordon is very slow plating and Gordon finds raw meat and loses it. Four of the twelve steaks were rare and Jordan is upset.

After the dinner service, Chef Gordon tells the chefs that there were mistakes on both teams that he prevented from leaving the kitchen. He tells them both to go back to the dorm and choose one member of their teams that doesn’t have the leadership qualities to be his head chef.

On the red team, Jordan blames Nicole, and Nicole blames Jordan. On the blue team Declan and Cody vote for Amber who does not want to go home and leave Hell’s Kitchen. On the red team, it is such a tough decision to come up with one person to put up.

Time to face Gordon, Declan says the blue team is nominating Amber and she says her vote is for Cody, there is a difference between arrogance and confidence. Mary Lou says that on the red team they nominate Jordan for a lack of communication and delegation.

Amber says she deserves to be there, she works hard and she is open to criticism and she ran the kitchen tonight. Jordan says she asks the team if the steaks were cooked and they said yes, if they needed two extra minutes they should have said something. Gordon sends Jordan home, he tells her that she is a soldier and he needs a general.