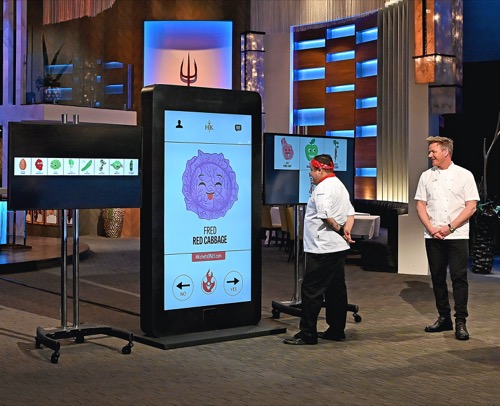 Later, the stakes are high during a special Steak Night dinner service, and all hell breaks loose when one team struggles with overcooking their dish.”

In tonight’s Hell’s Kitchen episode, Steve felt good after surviving elimination. He had one bad day and he feels he’s learned from it. He’ll come back stronger than ever. Everyone was glad he survived and they didn’t miss Josie. Not even her best friend. Emily hugged Steve after elimination and she told him he was glad he was there. Steve is a likable guy.

There was no one there who held any strong feelings against him and now the teams are evenly matched. They both have four members. They, therefore, went into the next challenge evenly matched as well. They had to use an ingredient app to determine which ingredients they were cooking with and both contestants who were cooking the same protein had to use the app at the same time.

Brynn and Steve both went first. She picked the ingredients she was used and Steve threw in an ingredient just to mess with her. The other contestants didn’t do this. They didn’t potentially sink their own dish to sink another person and so Brynn was very upset. Steve put dill on the menu. Brynn had no idea how to add dill to her lobster dish. She sorta had to play things on the fly and things got worse from there.

They all also had to pick a blind item to include in their dish. They picked the items wearing a blindfold and that messed up Sam because he picked pork jowls which he never cooked with before. And the teams only have a certain amount of time to cook their proteins with their ingredients.

In the end, they were judged by protein. Up first was lobster. Both Brynn and Steve earned a point. Then there was Fillet. Then the Pork Chop and then in last was New York Strip. The two teams earned the same amount of points and so they needed a tie-breaker.

The guest judge Richard Blaise had to determine who won the tie by naming the best dish of the day. He gave that point to Steve and so the Blue Team won another challenge. They rewarded a day at the spa. They were relaxing with massages while the Red Team was cleaning. They had to clean their shared spaces. Which was grueling because the twenty-year-olds were treating it like a college dorm. There was a mess everywhere and Brynn hated cleaning it.

It got her out of sorts. Brynn was so out of it that she went into dinner service with her mind not on the prize and she made rookie mistakes. Kiya noticed it. She’s sensitive to other emotions and so she hugged Brynn. She hugged her until she felt better. Brynn was also told by Chef Ramsay to speak up more in the kitchen and so the Red Team spoke as one. They answered the chef.

They got things on time and they got their dishes out correctly. The Blue Team however made mistake on their first dish. They messed up the risotto. They had to do it over again and so fast wasn’t always best. The Red Team later began making mistakes as well. Sam got a little too overly involved with the meat station and he was saying dirty words to it.

Sam even called it “sexy”. Yet, he delivered undercooked meat and so he had to put it back into the pan. Sam wasn’t the only one making mistakes. Antonio was messing up as well. Antonio made the crucial mistake of trying to cook his salmon with chicken stock. He admitted as much t

o Chef Ramsay when Ramsay asked him why he kept messing up and so everyone had to tell him to use butter. Not chicken stock. Antonio got the butter and he started over. The Red Team was struggling to recover and thankfully the Blue Team was struggling as well. The Blue Team had Emily. Emily struggled with cook time. She didn’t always put her meat on at the right time and so that set back the other stations who had to wait on her.

Emily got better. The Red Team on the other hand did not. The Red Team still had Sam and Sam kept messing up the meat station. He delivered dry chicken and then he overheated the chicken. He just made one mistake after another and the diners were starving. It got so bad that Chef Ramsay stepped in to tell the others to help Sam when he was down.

Antonio stepped up to help him. Antonio turned out to be the worst person to help because he helped Sam to deliver raw chicken. Ramsay had gotten so tired of the Red Team’s issues that the proposal that happened couldn’t even sate his anger. Someone proposed in the dining room. It was beautiful and everyone clapped but then right afterward Sam and Antonio delivered undercooked chicken.

The chef was so upset that he threw the Red Team out. The Red Team was kicked out of the kitchen and now they have to come up with two people up for elimination. It wasn’t a miracle to guess who they picked. They picked Sam and Antonio.

Both young men were put up for elimination and Sam was asked who was the weakest chef in the kitchen? He couldn’t answer. He wouldn’t say Antonio and yet Antonio immediately said “Sam” when he was asked. Ramsay was looking for the cutthroat. He eliminated Sam and Antonio got to stay another week. And so maybe next Sam will speak up for himself.