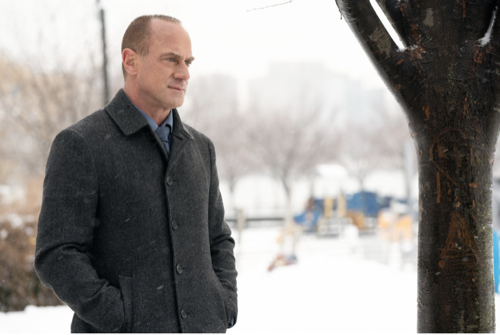 In tonight’s Law & Order Organized Crime, the episode begins with Stabler leaving the jail after speaking to the two men in Italian that he told that their money transfers were from the Queens auto body shop where Sasha worked.

Stabler goes to the park and meets Benson, she gives him her evidence folder. She tells him that she can’t believe he lived in Rome, he tells her that she would have loved it. She tells him that they found a burner cell at Lenski’s apartment, but they couldn’t crack it, maybe he knows someone who can.

He thanks her, again. He tells her that he wrote her a note, about her award, he was asked to say a few words – he wants her to have it and she can do what she wants with it. Her son runs up and asks her if she saw him sledding, she runs off with him. Stabler watches the two.

Stabler brings the burner phone to a known professional hacker, she gets into it and has the GPS for two days before Lenski was killed. She shows him the places, seems to be a lot of Starbucks, Subway, a storage facility that is registered to Hart LLC Business Corp., the company was closed for violations.

Stabler wants to know why Lenski was in that storage facility. Stabler and a team head over to the storage facility to look around. Stabler finds a safe, inside there are documents written in Italian, the passport of the owner of the building known as Rafe the poet. One of his team members also finds Stabler’s ID.

Stabler goes to see Rafique’s mother, he tells her that he is her best shot at finding out why her son was murdered. Then he tells her last week his wife was murdered. He tells her that he is trying to figure out what his ID was doing in Rafique’s warehouse. She says she has no idea. He asks her if she knows what he did, his business associates. She says her ex was an addict and he died years ago and all he gave her son was substance abuse. He asks her how long it takes.

Stabler heads back to his car and looks at photos of him and Kathy. His phone rings, he heads to jail and goes to see a man who knows Manfredi Sinatra.

At Kathy’s service, Stabler is there with all his children and Benson. His son Eli is taking it hard, he goes down to his knees and Stabler kneels down with him and says he promises that he has him. Benson hugs all the kids and then walks off with Stabler who tells the kids to start dinner without him, he has to make a stop.

Stabler meets with Manfredi near a bridge and he tells him that he just buried his wife. Manfredi asks what he wants, he says that he found his ID in the storage building that he owns, Rafique was just a tenant, not the owner. Manfredi says he doesn’t keep tabs on his tenants. Stabler asks him if he was trying to take him out, he took his wife from him. Manfredi says he has it all wrong, he doesn’t make mistakes like that, if he wanted him dead, he would be in the ground right now.

Manfredi visits his son Richard and asks him what the low life was doing having parties in is a warehouse. He says Rafique was working for him at contra-post since he was In prison with a bunch of other low-life thugs he didn’t think he would mind his using the warehouse for a legitimate enterprise. Manfredi tells him that he knows what is going on him with him and Puglia. Anyone that does business in Puglia, go to him first to ask permission. He calls his son a stupid little meatball. Someone killed a cops’ wife and evidence was found in his warehouse and he is angry. Richard tells him to let himself out.

Stabler finds out that the case is being handled by the task force led by Bell and she tells him that she wants to know everything that he knows. They meet the next day at the museum, she tells him that she has been looking into Manfredi and his son for two years, his son is one of the biggest distributors of illegal narcotics and he endowed the exhibit in the museum, it is called, “Richard M. Wheatly Collection of Antiquities.”

Stabler goes to see Mrs. Wheatley, he looks across the street and sees a suspicious guy on a motorcycle. All of a sudden, bullets go everywhere and they almost kill the two of them.

Bell tells Stabler that Richard is the reason they are there and she hopes the get his wife’s killer at the same time. He asks who else is on the task force, she says so far, just him. Stabler gets an encrypted message, “9 pm wonder wheel. I know who killed your wife.” He doesn’t tell Bell.

Richard has his father meet him in an amusement park and tells him to get on the Ferris wheel with him, it is called “Wonder Wheel.” His father asks him what he thinks about them getting into business together, he knows that they have had his differences. Manfredi tells him that he was meeting Stabler because he is coming after him and he wants to protect him. All of a sudden, they are high up in the air and the wheel stops.

They see an SVU pull up, it is Stabler. He sees the lights on the Wonder Wheel and looks around and sees the cage that Manfredi was in with his son, Richard is not there but Manfredi is dead. Then we see Richard, he arrives home, Mrs. Wheetley is there and she tells him that he didn’t need to send his goons, they opened fire and could have killed someone on campus.