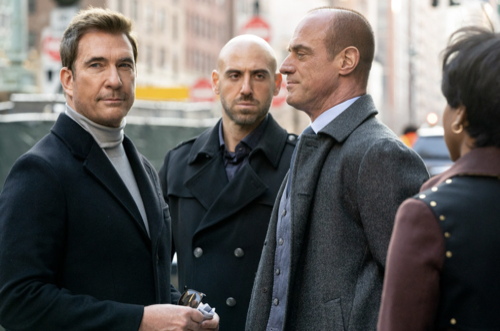 In tonight’s Law & Order Organized Crime episode, the episode begins with Bell picking up Stabler, they head to the scene of a crime, there is a Ferris wheel nearby. There are no witnesses, not much to work with. The police think it is a mob hit. Stabler sees the casing and says it usually belongs to someone with military training or fanatic gun nuts.

Richard Wheetley is having dinner with friends when he gets a phone call, his father is dead. He puts the call out of his mind and tells his friend they are going to have a vaccine party.

We then see two men, one is in a truck and stops at a train crossing – but there is no train coming. The other man is outside his truck and says he doesn’t see any train. Gunmen drive up and shoot the man outside the truck and others break open the back and steal COVID-19 vaccines. The other man is shot in the leg when he tries to run, but he is alive.

Once the dust settles and cops arrive on the scene, the man with leg injury says the perpetrators were all wearing masks like the military. Bell and Stabler are on the scene, she thinks there shooting the man in the leg is a message, try and stop us and we will kill you. The vaccines were meant for Harlem hospital and in two hours, if they are not refrigerated, they are spoiled.

At the precinct, Bell introduces Stabler to Diego Morales, from the gun violence division. They have the traffic surveillance, Stabler tells Morales to look for two black SUVs. Bell tells Morales that Richard Wheetley was one of the original online gangsters, when he was still a freshman at Columbia he developed an open illegal encryption software called Mastaba. Wheetley pushes a tone of purple magic, the street form is crazy-expensive, this guy is smart and dangerous.

Bell and Stabler head to Wheeley’s office, he says he can’t talk, they are heading to his father’s funeral. Bell mentions the heist, they say they deal with the company, but it is not their primary business. His business, Contrapost, is a direct delivery service licensed and accredited by the American Board of Pharmacists in all fifty states. Its mission is to provide affordable medication with compassion.

At the precinct, they discover that Wheetley is big into hedge funds, there is a pattern to his money, he always invests in tech. Bell introduces Stabler to a detective, Freddy Washburn. They find footage of one of Wheeley’s freezer trucks. Meanwhile, Wheetley tells his ex-wife that when her boyfriend, Stabler, swings by to chat about this and that, as he is bound to, she is going to tell him that they were together last night for Ritchie’s birthday.

Stabler thinks this is the reason why Wheetley bought an ice cream company, so he had a place to store the COVID-19 vaccines. Little does Wheeley know, his staff posts photos of themselves with the ice cream that falls off the conveyor belts, and in one of the photos, you can see the boxes of COVID-19 vaccines in the background. The team heads out to the warehouse to check it out and when they get there, it is empty, someone tipped them off.

Stabler is with Benson, she asks him why she startled him the other night and he tells her to back off. She says he has PTSD and he laughs. He says he has been on the job for thirty-five years. Benson says his wife was murdered right in front of his eyes. Her job as a captain is to make sure that her people are good and solid, and able to do the work. He says he will take care of it. She asks him if he told Bell where he was the night Manfredi Sinatra was murdered, she doesn’t know where he was. She only knows that he was jumpy and had a circle under his eyes, she is worried about him. He says he needed to hear her say that, then he tells her again to back off and he leaves the car.

There is a meeting to name a new successor since Sinatra was murdered, Wheetley walk into the meeting. He sits down and thanks to the group for their condolences and says he is devastated. They think he is making a play for his father’s shoes. Wheetley says he is there to make a business proposition and it was his father’s idea. He thought it would be a fitting tribute to his father if he modernized the organization.

Stabler asks Bell if she trusts Washburn, she says unless he has evidence then he shouldn’t say anything.

The team set up Stabler on a blind date under a false name with a woman who is getting the vaccine tomorrow, to get the name of her doctor. Stabler meets with Helen, the blind date, and he tells her the truth that he is a cop. He tells her the vaccines were meant for vulnerable people, or maybe her parents and she should give up the doctor’s name, she does it.

Wheeley is having his vaccine party, a doctor walks around and gives everyone a shot as they are chatting and enjoying a cocktail. Wheetley overhears his son talking, a little too much, he tells his daughter to handle him. She talks Ritchie to the side, and tells him that their dad doesn’t advertise that Manfredi Sinatra was his father. She tells him that their grandfather was a murderer and a thug and the world became a better place the moment he took his last breath, and he didn’t love them, because they were black.

Stabler is sleeping on the couch and talking in his sleep. His son comes in the room and wakes him up, he tells him that he was shouting, having a nightmare about mom. Stabler tells him they are going to be alright.

Bell and Stabler arrest Dr. Valentine for illegal administration of the COVID-19 vaccine. And, they arrest everyone in the waiting room for paying an absurd amount of money to illegally get the vaccine.

Stabler and Bell sit down for a meal together, he tells her that Manfredi Sinatra called him to say that he had information about who killed his wife. When he got there, Sinatra was dead and he called it in.

Stabler is about to arrive home, he sees his son and tells him to get inside, to the left of him there is a masked man. Stabler goes after the guy, but there is another one and the two beat him up and wack him on the side of the head with a gun, then the two get in a van and drive away.