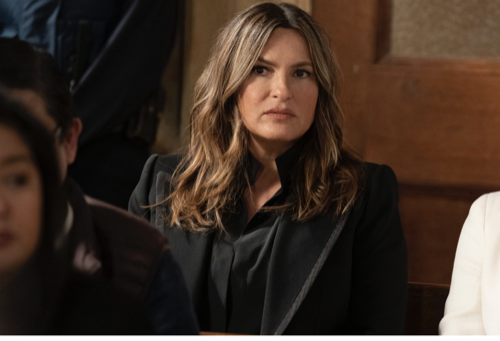 Tonight Law & Order SVU episode begins with Benson bringing flowers to Kathy Stabler’s grave, she sees Stabler and tells him he looks good since he shaved, and they smile. Stabler’s kids are there too, they all brought flowers, the kids leave and Stabler and Benson are alone. Stabler says that until Wheatley goes to trial there is no closure, Benson says Carisi said that Wheatley is out of postponements.

In court, Becker not being there causes a problem for the state’s case, but they request to go immediate to trial. To their surprise, Wheatley says he wants to change lawyers, and this is the fourth time, it gains him a one-week delay to trial to get new representation, he hires Barber as his new lawyer.

Carisi goes to see Angela, he wants to prep her to go on the witness stand. Meanwhile, Barber tells Wheatley that he wants to know anything Angela or Richie told him.

Stabler is with Benson, they see Barber who walks up to Stabler and says he is sorry for his loss. Stabler asks him why he is defending the man who killed his wife, then walks away. Benson asks Barber why he is doing this, he says because it is not fair, it looks like Wheatly was cherry picked. Benson is not happy about this, he asks her if she is sure Wheatley is guilty, she says she is, and he says it doesn’t give the NYPD the right to frame him.

Carisi and Barber head in inside the courthouse, Benson is in the witness stand. Barber asks her if she should have recused Stabler from the case and she says it is with his help that they were able to arrest Wheatley. Bell is on the stand next, she says they were monitoring Wheatley for over a year, and Becker had evidence in his possession that linked him to the bomb that killed Kathy Stabler. Barber suggests that someone in the NYPD planted the evidence to frame Wheatley.

During a court recess, Wheatley asks to meet with Benson and she agrees, but Barber is there. He tells her that he can’t imagine how terrified she must have been after her crash, and he gives her his word that he had nothing to do with her car going off the road. He tells her that Angela takes the stand tomorrow, she better make sure that Stabler’s children are not there, they won’t want to hear what she has to say and neither will she.

Benson goes to Stabler and tells him that whatever happened between him and Angela, Wheatley knows and Barber is going to use it tomorrow. He tells her it is none of her business. She tells him that she knows he is carving his way through a mountain of grief, but this, he hasn’t asked her what has happened to her since he left. He showed up at her house in the middle of the night when her son is there asleep, that was hard for her, scary. And this letter, she asks him why he gave it to her, he didn’t write it, what was that about. He says he is not sure he knows. He doesn’t know how to begin.

Angela is on the witness stand, she says she was poisoned and is still experiencing side effects, but her memory is clear and she is ready to testify. She says Wheatley was gas lighting her and killed her son. He also asked her if she wanted the detective to die and she said no. When she heard about the car bombing she felt sick. Barber asks Angela about her relationship with Stabler, and asks if there were romantic feelings for each other. She says they kissed but nothing else. Barber accuses her of arranging Kathy Stabler’s murder and framing Wheatley. She admits that she is in love with Stabler.

Afterwards, Wheatley is furious that Barber got Angela to admit she was in love with Stabler. Next, Richie is on the stand via video. Richie is about to say what he heard his father say to Becker, when he stalls, and says he doesn’t recall what he heard.

Stabler is next on the stand, he talks about the night that Kathy died from her injuries. Stabler then loses it and goes off and says everything that he believes Wheatley did, then he asks the judge how much Wheatley was paying him. The judge charges him with contempt. Later, in the washroom, Wheatley tells Stabler that when this is all over Angela will be with him, Stabler says maybe, but she will be thinking about him.

In court, Wheatley wants to testify, just then Benson and Angela walk in and sit down. Wheatley says Stabler ran a rogue investigation and blamed him for killing his wife, but he didn’t do it. He says he has in common with Stabler that their families were torn apart. Wheatley blames Becker, he says when he found out about it he confronted him and Becker slipped into the wind. Carisi cross examines Wheatley and pushes his buttons, Wheatley gets angry and says if he wanted someone dead they would be dead, including Carisi.

After court, Barber meets Benson in a bar and finds out the vote is deadlocked. She tells him that she feel betrayed by him and she doesn’t know how she will ever get over it. Jury is back, everyone returns to the courthouse. The judged declares a mistrial, the jurors don’t believe they can come to a decision even if they have more time.

Eli has disappeared, Stabler keeps calling him and he doesn’t answer.