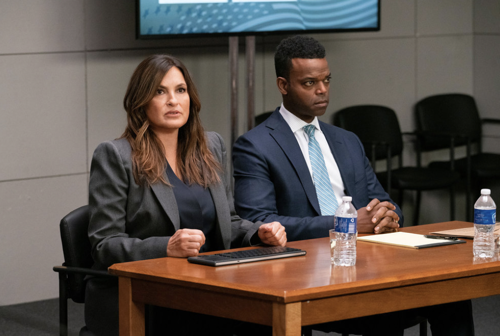 Tonight on NBC Law & Order SVU returns with an all-new Thursday, September 23, 2021 premiere episode and we have your Law & Order SVU recap below. On tonight’s Law & Order SVU season 23 episode 1 “And The Empire Strikes Back,” as per the NBC synopsis, “As the investigation into a sex-for-housing scheme expands, Benson’s loyalty to Garland is tested. Rollins and Carisi try to keep their witnesses on board when a powerful congressman is identified as a suspect.”

In tonight’s Law & Order episode, the episode begins with Rollins and Carisi sharing that kiss at the courthouse and Rollins is wondering if it is even real.

Fin and Phoebe give Kat and her partner the flowers from the wedding. Meanwhile, Garland gets called to a meeting and his wife thinks that McGrath is going to bully him.

Benson doesn’t show up for the meeting, Carisi calls her again and she says she is on her way. Benson is on the phone with Stabler, she tells him that she has to be at the DA’s office, a car is trying to pass her and Stabler tells her to pull over, she gets sideswiped and goes into the bushes. Benson wakes up and she is being put in an ambulance, she looks up and she thinks the EMT is Stabler.

Later, Benson is at the office with a broken ankle, Carisi wants her to get an MRI. Benson doesn’t want to talk about it, she just wants to be brought up to speed.

Benson testifies in front of a panel that includes McGrath and gives out the names of the big players. Benson says they are still building a case against Howard, McGrath says to reel him in, it’s a win for the team and everything will be forgiven.

Howard is at a restaurant and is upset that his sex trafficking victims are not around and he wants Machado to get him some more teenage girls.

McGrath goes to speak to Benson and tells him he is worried about Garland’s judgment because of his former relationship with Machado, so he wants to put another US on the job.

At a meeting with the SVU team, Benson learns that the women don’t want to talk but Benson insists that Kat talks to Rosa. Kat visits Rosa at the school, tells her they want to make a case against Howard. It is over for her, but he is still raping girls and they need her help to put him away. Rosa asks her if she is crazy.

The team and Garland listen in on Howard having a conversation about teenage girls, McGrath wants Howard arrested now. Garland says they are only going to get one shot at Howard. McGrath says that once Howard announces that he is running for President any arrest will be perceived as political. Benson gets a text message and says she has to leave right away.

Kat tells Fin that she feels really bad about pressuring Rosa. She says he knows the just is not easy but today it felt wrong.

Benson is being questioned about Morales’ death, Benson says it was textbook. She goes on to say that she received a text from Stabler, but she now knows it wasn’t from him, it was from Richard Wheatley and part of his vendetta against Stabler. Furthermore, she thinks his intent was to kill her as well at the hospital.

Benson is with Fin and she is in pain, he takes her to the doctor. Meanwhile, Ortiz is having second thoughts about being a CI because Howard gave him his first chance. Kat ignores him and tells him that he will be fine.

Howard is holding a party, Machado introduces him before he gets on stage. Later, a guy named Q is speaking to Howard. Up in Howard’s room, he brings Q and there are a lot of young teenage girls, Howard introduces Jenna to Q. All of a sudden, Jenna doesn’t feel well, his drink was drugged, Howard takes her to lie down and she can barely stand up.

Rollins is watching on video with Carisi and Kate, and she is just counting the felonies. Carisi is the first to burst into the place, she handcuffs Howard and Finn tells Jenna that she is going to be ok. Q is upset, he tells Howard he set him up, Howard tells him to lawyer up. Q claims to be a UC, Rollins and Fin don’t know anything about it, then he mentions McGrath.

Rollins is furious that nobody told her about the UC. Benson tells her that Garland didn’t know and McGrath told her not to tip anyone off. Benson gets a call, Jenna is awake.

Benson’s ankle is fractured, it had to be reset. Finn tells her to go home, she says no way. Meanwhile, Q is in a cell with Howard, Finn goes to get Howard and tells him that his lawyer is there.

At Mercy hospital, Jenna is upset that her parents were called without her consent, Kat reminds her that she is sixteen. Rollins and Kat ask her questions about her relationship with Howard. She says he would call a car service several times to pick her up, she would give him massages but not sex.

Carisi tells Howard’s lawyer that he was caught in bed with a teenage girl. His lawyer calls it a political witch hunt. Benson shows Howard photos of girls, he claims not to know them, Carisi says they know him. Howard asks who put them up to this, Benson says nobody, they are SVU and he is a sex trafficker.

There is a press conference, Benson wants to wait for Garland, but they won’t. All the charges are mentioned. Garland watches on TV and asks Celia why it wasn’t on his schedule, she says she wasn’t notified. When she leaves the room he throws the remote across the room.

Later Garland sits with Benson, he is not angry but tells her there seems to have been a miscommunication. He thanks her for always having his back, she says always.

Grand jury room, everyone testifies except for Jenna, she won’t.
Howard and his lawyer meet with Carisi and Benson, he says Machado is lying. Howard says he is not going to prison, he is going to be President and nobody is going to take him down. He threatens to have Carisi fired and Benson reduced to a traffic cop. His lawyer takes Howard out of the room and tells him that he should have kept his pants zipped and now he needs to keep his mouth shut, Howard tells him to make this go away and his lawyer slaps him and calls him an idiot.

Carisi is feeling good about the meeting, he is now with Rollins and tells her that he wants to take her to dinner. Rollins gets a call, so does Carisi. All the witnesses are killed, including Machado, except Rosa who we see running away with her son after she gets prank calls and then sees two shady people coming into her apartment building. Benson orders the team to find Rosa and Jenna now.