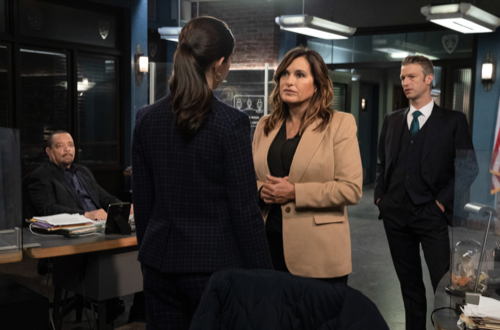 Tonight on NBC Law & Order SVU returns with an all-new Thursday, January 14, 2021 premiere episode and we have your Law & Order SVU recap below.  On tonight’s Law & Order SVU season 22 episode 5 “Turn Me On Take Me Private,” as per the NBC synopsis, “The SVU investigates whether a role-play session on a camming website turns violent when one user decides to meet his idol in person.”

We see a girl named Zoe, she visits with her father in a wheel chair and at first, he doesn’t recognize her. Then one of the staff where her father resides reminds her that his bill is six months past due. Zoe is role playing on live video, one of her clients as asked her to be a victim. She puts on a blond wig and handcuffs herself to the bed. While she is making the video, someone breaks in and starts to attack her. The people watching the live video think it is just part of her act.

Zoe’s stage name is Kendra, one of her clients, Larry, recorded the video and takes it to the SVU because he is worried about her, he says they were really close. It’s hard to track her down, technically the girls are independent contrators who get paid by the site. The owner of the site says he is not giving up the girl’s identity.

Sugarfap Headquarters, Carisi and Benson visit with the owner. He tells them it is consensual and social distance, and the girls push it so the clients give them tips. Benson says she needs to speak to the girl. Carisi gives the owner a supbeona for the girls address.

Benson and Tamin visit Zoe at her daytime job, Benson tells her that one of her clients believes she was assaulted last night. Zoe says she was raped, but she thought if she went to the police they would laugh at her. At the station, Zoe tells Benson and Tamin that she has been working a double life. She worked retail, but her father is in a nursing home, she has school, tuition. Last night, she was acting out a ravishment fantasy, pretending someone had broken in and that is when she saw the comments that someone was coming in the window.

They thought it was part of the act, she tried to get away, he tried to choke her and rape her. He said, “you know you want it,” low. Nobody knows where she leaves, she is really safe. They go through the list of her best clients. Benson gets Zoe to reach out to all of her best clients, trying to find out who did it. All of a sudden, Tutuola breaks into the guys apartment and arrests him. On his wall, he has all these weird and disturbing photos of Zoe.

At the station, the guy claims that Kendra posed for those photos, she wanted him to have them. And, what he did was role playing, she wanted it. At this point, he tells them he is a paralegal and he is going to request representation.

Carisi says the guy and Kendra were in some kind of relationship, she did role play the victim scene and a jury would have a problem with that.

LaGuardia Home for Seniors, Tutola and Tamin visit Zoe. She says Gabe was one of her early subscribers, he was shy at first, but they have been doing this for a long time. She never gave him her address. Tutola says Gabe was stocking her, he had pictures of her at this home. She says about six months ago she was in a private with Gabe and she was really upset, she mentioned that she would probably have to put her father in a memory care ward, he recommended this place.

Benson tells Carisi that Zoe is in grad school, she volunteers at a Catholic school and she doesn’t want the real people in her life to find out about this. She is afraid of Gabe, Carisi says there is a restraining order in place, but if she doesn’t take the stand, he can’t take this to trial.

Carisi meets with Gabe and his lawyer and offers a deal. Then, at arraignment court, Gabe’s lawyer says he pleads guilty to aggravated sexual abuse in the third degree. Gabe speaks up, he says he is not guilty, he loved Zoe. He fires his lawyer and says he is going to defend himself. The judge says he advises against it. The case is going to go to trial, Carisi says he gave him a good deal, he doesn’t know what he wants. Benson tells him that he wants Zoe.

Gabe is at Zoe’s apartment, as a lawyer, he is allowed to inspect the crime scene. But, Tamin is there with her. The jury has been selected, Gabe choose mostly older women. At the supreme court, Larry, who recorded Zoe being attacked testifies. Then the owner of Sugarfab testifies and he says that Gabe was obsessed with Zoe, he wanted her address.

After court, Gabe goes to visit Zoe’s father at the home, Zoe calls Benson and Tamin, they show up and tell Gabe to get out of there. Zoe’s dad says he met her boyfriend and he brought him ice cream. Benson tells him that he is in violation of his restraining order and tells him that he is under arrest.

Back at court, Zoe is on the stand. She says she is a private person, and she is only there because what Gabe did was wrong. She was acting out a fantasy, it was role play. She was crying and saying no, he had to have known she didn’t want what he was doing. Gabe’s turn to speak to Zoe, he asks her if she was turned on, if she enjoyed it. She says she was role playing. Then, he plays a video of her telling him she wants him so bad and she loves him. Then he plays two more videos and they are all damaging.

Zoe says she was faking everything, it is part of caming and not real. She continues to say she was role playing. Larry is back in the witness stand, he says he shares a lot of personal stuff with Kendra, they love each other. A few more clients sit in the witness stand, and it is starting to get to Gabe. Gabe wants to examine Zoe again, she is back in the stand. He asks if she told Larry that she loved him, she says yes. Then he tells her to tell him that she loves him, she won’t. Gabe loses in court and asked to be pulled out of there. Gabe gets seven years in prison. Zoe goes off the grid, Tamin is upset, she should have been protected.