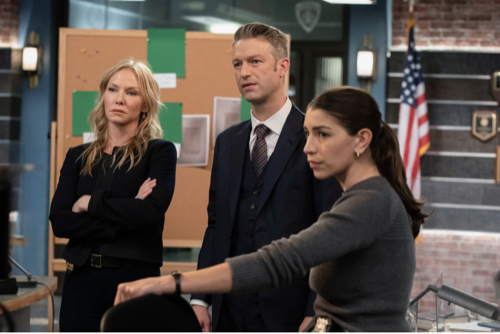 Tonight on NBC Law & Order SVU returns with an all-new Thursday, February 18, 2021 episode and we have your Law & Order SVU recap below.  On tonight’s Law & Order SVU season 22 episode 7 “Hunt, Trap, Rape, and Release,” as per the NBC synopsis, “Benson teams up with Lt. Barek and the Bronx SVU to track down a serial rapist with victims in both boroughs.”

We see a girl in her room, she is getting ready for bed and she notices that someone is in her room; it is a man with a mask on and he tells her to be a good girl. The next day, the victim’s name is Rosie Zeran, she is 23 years old, she says the guy came through the window. Rollins is with the victim who doesn’t want to leave her apartment. She tells her that it would be easier to talk at the hospital. Rosie says she could only see his eyes for a second before he pulled out the tape. He tied her hands in prayer and didn’t say anything else. He raped her and when he was done, he said if she called the cops he would kill her. He used a condom and he used gloves, and there are no security cams on that block. Tutuola says he is a pro.

Office of Lieutenant Carolyn Barek, Benson, and Tutuola drop by for a visit. Benson tells her that she has a rape case that matches one of her patterns, the victim’s hands were duct-taped in prayer. Barek says, good girl rapist. Benson wants to coordinate on the case. Barek says she won’t coordinate, it is their case and they’ve got this. Sargent Moldovan comes into the office, he is the one handling the case. Moldovan tells them to have over their file, Tutuola says no. Finally, Barek gives in, Moldovan is not impressed. Benson wants to start with interviewing all the victims again, a fresh look at the case.

They find out that the attacker liked to talk to the girls afterward, he would sit on the edge of their bed. Rosie says he smelled like whisky. Moldovan and Rollins discuss the case, he says he doesn’t understand why the rapist left the Bronx.

Back at the station, Carisi is updated on the case; the rapist is more about access and vulnerability. All the victims live alone, easy entry, first floor, a window right off the fire escape. Kat says bad news, the good girl rapist has struck again.

Cypress Avenue, The Bronx. This attack is consistent with the other rapes. At the scene, Moldovan and Benson get into a scuffle, Tutuola jumps in to protect her and Barek tells Moldovan to stand down when he is shouting that this is his case.

Barek and Benson are in front of the chief and he is upset that the two are fighting, he tells them that they are part of a new task force to catch the rapist and they need to work together.

Kat talks to Ruse and she finds out that there was another rape case that wasn’t followed up and Moldovan knew about it. Benson confronts Moldovan, the victims’ names are Bella Gardner. Rollins and Moldovan go out to speak to her. Bella tells them she didn’t go to a hospital because of COVID. She says the attacker had booze on his breath, he tapes her hands and eyes, he was just a shape in the dark. He whispered to her, be a good girl. When he was done, he said if she told the police, he would know and kill her. Moldovan gets a call, there is another attack, but this time the victim hurt the attacker and he is on the run, bleeding. Rollins and Moldovan are in pursuit, she has a visual.

Moldovan catches up with the guy and tells him one more move and he shoots twice. The attacker puts his hands up and tells Moldovan, look I have my hands up, Moldovan shoots him twice while Rollins is watching. The guy is ok, he is arrested and taken away. Rollins tells Moldovan that he was unarmed. Moldovan says he saw a gun. Tutuola walks up and looks at Rollins, asks her if there is anything she should know. They never find another gun.

The attacker is in the questioning room, he is a devout Catholic and his name is Danny Gonzales. Moldovan, Rollins, Danny, and his lawyer are in the room. Danny says he isn’t a rapist. His lawyer says that this is simply a burglary gone bad. They show him photos and tells him the dates of the other women who were raped, he has an alibi for one of the dates. Five out of seven victims recognize his voice.

Tutuola and Rollins go back to see Rosie, they find out that Moldovan is there already. The next day, Benson and Tutola are talking to the chief and he says what he saw, was Moldovan doing some witness tampering and he has been trying to push them out of this case from the beginning. Tutuola tells Benson that there is also something off about the shooting and Moldovan saying there was a gun.

The team is in Benson’s office and Carisi walks in. Moldovan was at a bar, in Rosie’s neighborhood the night she was raped and that is why he blames himself. Bella and Rosie said that their rapist was soft-spoken and they know Gonzales couldn’t have raped Bella. Tutuola brings up the shooting, Rollins says he could have been trying to kill the guy, there was no gun. Carisi says if Moldovan is a copycat, they have to look at his other cases.

Carisi and Tutuola go to the correctional facility to speak to Joey about Moldovan. He confessed that he raped four women, there was DNA proof and then he admitted to another two that didn’t do. Moldovan told him that if he would cop to the six, he would be locked up near his mother. His mother passed away a month later, so he tells them to screw Moldovan.

Rollins is in a bar with Moldovan, she tells him that Gonzales’ lawyer is threatening to sue. And, Benson keeps asking her if there was a gun when he shot at Gonzales. She tells him that Rosie recognized his eyes, she says they were the same as the rapist. Moldovan says he saw Rosie at the bar, she was wasted. He says he works his ass off, she asks if he went so far down the rabbit hole that he couldn’t get out. He says he is not like those animals. Then, he is pointing a gun at her under the bar. She knocks his hand to the side and manages to get out of the seat and pull out her own gun. Tutuola and Kat come in and he threatens to shoot himself, Rollins tells him to do it, he drops the gun.

Ruse confronts Kat and calls her rat, and Rollins. Kat says he is a rapist. Ruse says she played her like a dumb rookie and she will never get promoted now. Tutuola was nearby and he heard everything, Kat says all good.

Benson and Barek are in the chief’s office, Barek blames herself. He tells her he is going to move her back to homicide, keep her head down, do her job, everything passes.