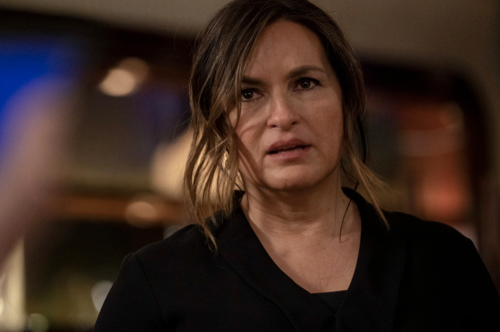 Tonight on NBC Law & Order SVU returns with an all-new Thursday, April 22, 2021 episode and we have your Law & Order SVU recap below. On tonight’s Law & Order SVU season 22 episode 12 “In the Year We All Fell Down,” as per the NBC synopsis, “Benson walks into a hostage situation at a neighborhood restaurant; Rollins tries to help her father after he’s hospitalized.”

In tonight’s Law & Order SVU episode, the episode begins on March 7th, 2020 in the kitchen of Vanessa’s restaurant. April 30th, 2020 the owner of the restaurant and her family are waking up for the day and we see how the pandemic is affecting them. June 29th, 2020 Vanessa is doing renovations on the restaurant, Ira asks her if this is a good time to do it, she says she has no choice. Her husband is helping the laborers, he usually plays the trumpet on Broadway, but it is closed. October 20th, 2020 Vanessa and her mother get in an argument, their son walk in without a mask and they are not happy. Vanessa’s mom is sick, she tells her it is just allergies. Her husband says he has to go be with his dad, he is sick.

At the restaurant, Vanessa and Ira have to let go more people. December 28th, 2020 Vanessa is face timing her mom who is on a ventilator. January 17th, 2021 Vanessa is serving clients outside the restaurant, they give their condolences about her mother. She gets a call from Joey, he says he can’t extend the loan. Later, she facetime her husband, he says he is not coming back, they weren’t happy before covid. Joey calls her, tells her he can meet her with a truck, get out everything she wants before the marshalls show up. Vanessa goes into her room and takes a gun out of a lockbox.

Rollins gets a call from her dad, she is with Carisi, they are visiting with him because he had a mini-stroke. When they see him, he says he is fine. He looks at Carisi and tells him that he has wonderful women there. She says she is not with him and her father says her problem is, she meets a nice guy and she thinks she is too good for him.

At the auditorium, One Police Plaza, Kat, and Benson are in a class, Benson has a fake knife and Kat is playing the officer trying to talk her down. The instructor gets up and tells Kat she has to stay focused if she wants to stay alive.

Benson is walking down the street, she is going to stop at Vanessa’s to get take out. Ira sees Benson and tells her Vanessa was supposed to take some things and leave. Benson goes in, Vanessa has the knife, Joey is there, and two officers. She tells the officers and tells them to get out. Benson tries to convince her to let Joey go, she tells her that she doesn’t need the knife. Vanessa says she will get her purse, she goes to her purse and grabs the gun, and points it at Joey.

Deputy Chief Garland shows up, the officer on the scene tells him the woman inside is nuts. Ira is there, he tells him that all the cops are going to freak out Vanessa, she is on edge. Inside the restaurant, Joey looks like he is having a heart attack. Vanessa is shouting that Joey is taking her restaurant from her. Benson tells her to let him go, they can talk about it, just the two of them. Vanessa says if they want her out, they will have to take her out in a box.

At the emergency room at St. Michael’s Hospital of New Rochelle, Jim Rollins fell and is on a stretcher. Rollins is there and she can’t get any information.

Joey comes out of the restaurant, he tells them that Vanessa has lost her mind, he has known her for twenty years.

Benson and Vanessa are alone in the restaurant, Vanessa still has the gun in her hand. Benson gets a call from Eddie, Vanessa’s husband. She says she hasn’t seen him since Thanksgiving, he said he was going to help his parents and he never came back.

Eddie is on Facetime, he speaks to Vanessa and she tells him he lost his job and say on the couch for eight months and did nothing. He says he is on his way to the airport, she tells him that he said it wasn’t covid, there were problems before that. She hangs up and says goodbye. Vanessa tells Benson to get out, she points the gun at her and says she will shoot her.

Rollins’ father suffered a major cerebral vascular accident. Rollins doesn’t understand, he says there were a lot of factors. He asks her if her father has a living will, any healthcare directives. She has no idea. Carisi walls in, she says her father is going to die, they are talking about a will. She tells him he is the only one who answered him, Benson is not answering. He tells her that she is in a situation. Meanwhile, at the restaurant, snipers arrive. Garland is upset, he tells them Vanessa is not a criminal and she is not insane. She is in a crisis and captain Benson can handle that.

Inside the restaurant, Vanessa says every morning she thinks she should call Ira and ask about the reservations, then she has to remember that there are no reservations. Benson tells her she should talk to someone, get some meds. Vanessa says she has no health insurance, she doesn’t want to talk to a stranger on the phone. Vanessa mentions her mother, and how she couldn’t say goodbye to her. Benson didn’t know she lost her mother. Benson tells her she wishes she could give her a hug; Vanessa picks up the gun again with one hand and drinks alcohol with the other.

At the hospital, Amberlynn Rollins shows up, her stepmother and she looks younger than Rollins. Rollins asks her where was she when her father had his first stroke last week. Amberlynn asks her if they talked about a DNR.

Vanessa tells Benson that she blamed her son for his grandmother getting covid because he was going out with his friends without a mask. She threw him out and hasn’t seen him since. Benson tells her if she wants to end, that is fine, but she has to tell her son that she forgives him and not make him carry that load for the rest of his life.

Outside the restaurant, it is nighttime. Benson speaks to Garland and tells him to find Vanessa’s 19-year-old son, Nate, he might be able to help. Kat asks Ira if he knows where Nate is, he doesn’t know but he tells her to check with Eddie, they are in communication.

A nurse comes in and tells Carisi that he and Rollins can go in now, she thinks Carisi is her husband. Rollins tells him that she just got off the phone with her mom, she made Jim take out a life insurance policy and Rollins is sure that is the reason why Amberlynn is there. Rollins is with her dad, she tells him that he is going to ok. Amberlynn comes in and he looks really stressed when he sees her.

Benson tells Vanessa that people don’t know what other people are going through. Just before the pandemic, she lost her brother to an overdose. Then she says Ed Tucker, the guy she went to Paris with who adored her, died of brain cancer and he killed himself because he didn’t want to be a burden to his new wife.

If she had known that, that the last time she saw him, she would never see him again. She would have said to him and Simon, Simon was supposed to meet her and Noah on the day he died, he didn’t show up and she left an angry message. There is not a day that goes by that she doesn’t regret that.

Carisi tells Rollins that Benson is ok, they are still talking. He talks about his parents, says his mom cooks too much and his father complains that he eats too much, but they are doing good. She says he wanted to tell her something before she went to Atlanta, he tells her that she has enough on her plate. Rollins tells him that the look on her father’s face when Amberlynn walked in, he looked scared and she has never seen him like that.

Rollins is with Amberlynn and tells her that she knows about her outstanding warrants and legally she has to arrest her. And, she can’t find a legal divorce from her first husband. Amberlynn says that it was a common-law divorce. Rollins tells her she should leave the state, she is young and should follow her dreams, not take care of a sick old man. Amberlynn leaves.

He loves her, and please come home. She tells him that she loves him. Nate did good, it is all over. Vanessa tells Ira she is so sorry. All the people outside, people are cheering and Ira tells her that customers started a gofundme account and they already have thirty-five thousand. Garland tells Benson to take a few days, let someone take care of her.