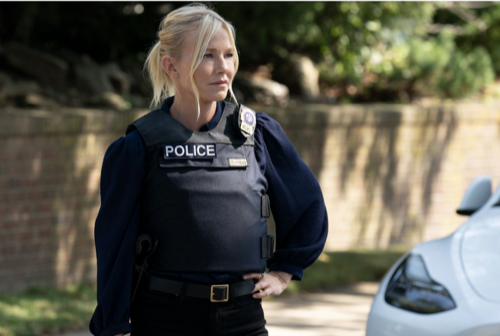 Tonight on NBC Law & Order SVU returns with an all-new Thursday, October 7, 2021 episode and we have your Law & Order SVU recap below. On tonight’s Law & Order SVU season 23 episode 4 “One More Tale Of Two Victims,” as per the NBC synopsis, “The SVU searches for a serial rapist who preys on mothers with young children. Benson and Fin struggle under the tightened reins of Chief McGrath. Guest starring Octavio Pisano, Jade Marie Fernandez and Johnny Pemberton.”

Tonight’s episode begins with Benson heading to a meeting that McGrath called. At his office, Benson sits down and they talk about some cases. He sees a look on her face and he asks her if she is ok. She says she is not used to going over every one of her SVU cases with the chief. He thanks her and her squad for being so welcoming to Joe Velasco. She is surprised that Velasco said that.

We see a young woman, Crystal Nunez, 28 years old, and a guy dancing, it starts to get steamy and they walk off to a secluded area around the building. He walks her home and when she is about to go in, she tells him she has got to go because the babysitter has to go home, he looks at her surprised and says “are you kidding?” Then we see him on top of her, it looks like he is raping her, and her young son, Manny, is watching, the man says, “if he cries, he dies.” She is crying silent tears and tells her son that she and the man are playing a game, she is fine.

Rollins tells Carisi that Velasco is in their office helping them. She doesn’t have a problem with him, but anything that is said to him will go straight to McGrath.

Rollins, Fin, and Velasco are heading into a hospital, Fin says, “he raped her in front of her three-year-old kid.” Rollins tells him welcome to SVU. The father has picked up the little boy. The guy who raped her came back to her apartment, knocked on the door, and said there was a gas leak, when she opened the door, he pushed his way in. He made her put on a nightie and pretend to enjoy herself, or he would kill her. Rollins speaks to Crystal, she tells her they need to run a rape kit. Crystal says he wore a condom. She said she went to a party, had two drinks, and danced. She didn’t see anyone following her. But earlier, a couple of neighborhood guys were harassing her when she was buying Manny an ice cream. She is worried that whoever did this comes back and hurts her.

Fin and Velasco search her apartment. At the station, they go over everything with Benson. They got a hit off a print, a Travis Hillsdale, busted last year for drug possession, he owns an ice cream truck. Fin and Velasco go see Travis and he recognizes the photo of Crystal, he remembers that some guys were harassing her when she was buying ice cream for Manny. He admits to being in her apartment, last week he returned a sippy cup that belonged to Manny, the babysitter who was at the house at the time. Crystal’s lab results came back, three different semen samples, none from anyone who is in the system.

Benson and Rollins sit down with Crystal, she finds out about the three samples. She says her ex is trying to get custody of Manny, he thinks they are still together, one of the samples is probably his. He came by two days ago.

Velasco and Fin interview the guy Crystal was making out with at the party, he says it ended at the back of the building, then he went home to his wife. Next, they go see Manny’s father, he says he never laid a hand on Crystal and he is furious that Crystal was raped in front of Manny.

Rollins interviews Crystal’s neighbor who admits that he was with her a few nights ago.

The ice cream vendor’s DNA was not a match and the other three had alibis. McGrath says there was probably no rape, they have been there before. She brings someone home she shouldn’t have and is worried about the ex finding out. She cries rape and comes up with a story about the kid to get sympathy. Benson says she is not a perfect victim, but she is not making this up. McGrath says they better hope so. Then he tells Benson there is no case there.

Benson is at the doctor’s office, she wants to be cleared so she can go back to full duty. He asks her if she ever considered moving on, retiring. She says no, she has not considered it and doesn’t want it, she needs to work, she loves her job. He says the last few years, the stress, the accident. He can put her back on full duty, or he can put her on the fast track to three quarters pay, tax-free, full benefits for life.

Benson and Rollins are with Crystal, she is upset because his ex, Eduardo, wants Manny with him. Rollins gets a call, a woman named Peggy was raped in front of her 18-month-old baby, Velasco and fin are on the scene. McGrath wants a high-level response, the victim’s father is a police captain. Rollins and Benson interview the victim, the man pushed his way into her apartment and raped her in front of her daughter. Her father insisted that she keep a gun, she got it, but the man got it from her and pistol-whipped her. She says he was white, average-looking. He said “if she cries, she dies,” she was terrified. Benson tells Rollins that they are looking at the same guy. McGrath shows up, Benson tells him that the guy said the same thing to Peggy that he said to Crystal, and Peggy scratched him.

There are a lot of eyes on this case, Benson tells the team they are probably looking at the same perp. Rollins says the women are as different as their neighborhoods.

Benson and Rollins go to visit Peggy in her apartment, Benson asks her various questions and ends up finding out that Peggy brings her daughter for ice cream at the same vendor as Crystal, Travis.

Fin and Rollins head over to talk to Travis, he runs for it and has a gun. Velasco jumps him to the ground and is a little rough with him, Fin shouts at Velasco to stop, it is over.

Travis is in a questioning room, Rollins and Carisi are questioning him in front of his lawyer. Travis’ DNA was underneath Peggy’s fingernails. Carisi and Benson go outside the room and speak McGrath, Carisi says they will arraign him on both rapes tomorrow, McGrath says no, there is a bigger picture here. They are only charging him with Peggy’s rape, Crystal’s case has two many holes in it. Benson tells Fin that she wants Crystal’s place checked again, she is sure there is touch DNA there.

Rollins and Velasco, found something, touch DNA and semen on Manny’s baby blanket, both are a match for Travis.

In arraignment court, Travis comes into the courtroom and his face is beaten up pretty bad and his arm is in a sling. A man walks into the courtroom and says he has late-breaking news for Carisi. The powers that be want Crystal’s charge taken away because they feel like there are too many holes in her case and it could cause reasonable doubt. Crystal is upset, she leaves the courtroom and tells Benson and Carisi she is on her own.

Rollins tells Velasco and Fin that Travis is in police custody, there is no excuse for what happened to him, he’s getting beat up. Benson goes to see McGrath, she says she is trying to piece together why Travis wasn’t charged for Crystal’s rape. He says it’s a good thing, given Crystal’s ongoing custody battle. Benson asks him where he heard about the custody battle, he says it’s his job to know what is going on. She says she is very upset at how this played out, she needs to run her unit as she sees fit. The Crystals of the world, they matter in her unit, in her squad, just as much as a white shirt’s daughter. She will never be a part of this double standard, ever again. She says if he stands between her and any other sexual assault victim again, he can take her shield and her gun. In fact, if that’s not understood, take them right now. He says he thinks they understand each other.