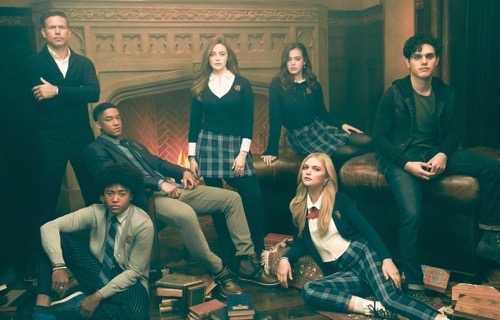 Tonight on the CW their new supernatural series Legacies air with an all-new Thursday, January 21, 2021 episode and we have your Legacies recap below.  On tonight’s Legacies season, 3 episode 1 called, “We’re Not Worthy,”as per the CW synopsis, “In order to get a handle on some urgencies at the school, Alaric (Matthew Davis) sends the students off-campus for their first-ever field day.

But when a medieval monster arrives with a challenge, the students are left scrambling to guess which one of them may be a worthy opponent.”

Just as Landon looks to cross over to the other side, the Necromancer stops him in his tracks. Meanwhile, Hope lays still asleep.

Alaric meets with the students. He shares with them all that he is working still to find Landon. He tells them all Hop his taking some time away. He then announces the entire school is to be kids and head out for a day of activities.

Chad is fooling around with a cape when he summons a woman named Nimue from the black bubbly pond. Meanwhile, the necromancer brings Landon back to the school. He is mad. He wants Landon to come back from the dead so he can get his dark magic like he was promised.

Lizzie and MJ hang out at the activity day. She warns him she will have to do something a bit drastic to save her sister’s reputation after Josie tried to kill her classmate.

Lizzie manages to remind some of their classmates how sweet and nice Josie really is. Meanwhile, the necromancer gives them an hour to get his dark magic back. Landon isn’t budging. If he stays dead the necromancer wont get his magic and everyone stays safe.

Josie ends up in a pit of mud after they lose tug of war. In front of the school, she tells Lizzie her magic is gone and she needs to stop trying to help.

Lady Nimue shows up at activities day. She cleans Jo up in a second. She asks for the sword. They all deny her until a monster warrior in metal arrives. With green eyes and a scowl, the students run away except for MJ, Josie, Lizzie and a few. They plan to fight.

In order to save Hope, Raf tries to make a deal with the necromancer. Meanwhile, Alaric talks to a sleeping Hope. He tells her he thinks she doesn’t want to wake up because she knows Landon is dead. But they all need her.

Joe and Lizzie team up with the sword to take out the monster. The only problem – they can’t get the sword out of a piece of wood. Nimue tells them it can only be a worthy champion.

Chad shows up at the school. He tells the necromancer about how Nimue appeared at the crypt. He also shares some vague information about the sword. Meanwhile, Lizzie and the gang think they need Hope to help. She is the worthy champion. They decide to team up with her gone.

Landon and Raf talk while Landon sits at her bedside. Raf tries to talk him into coming back. Back at activity day, Raf shows up to help. He was apparent worthy. He takes out the monster and Nimue offers him the sword.

Landon kisses Hope. She wakes. Meanwhile, MJ finds tracks. He follows them. It is Lizzie. They sit and talk alone in front of the fireplace. Landon and Hope kiss and talk when Raf arrives with the sword.

Outside, Alyssa and Chad talk. He is suddenly killed. The necromancer comes for Alyssa. He has a deal for her.