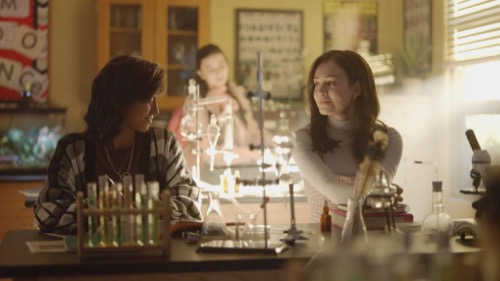 Tonight on the CW their new supernatural series Legacies air with an all-new Thursday, March 11, 2021 episode and we have your Legacies recap below.  On tonight’s Legacies season, 3 episode 6 called, “After a sudden mass exodus of the school’s student body, Alaric and the squad desperately try to recruit new students to keep the school afloat; Hope agrees to help Lizzie with the new student orientation.”

In tonight’s episode of Legacies, Landon walks into a diner. The necromancer is serving at the counter. Meanwhile, at the school, Rick gives Jo lunch for her first day of school. He gives her a pep talk.

Lizzie asks Hope for help with the prospective student tours now that many of the students have left. They head to meet the students. There are hardly any. At the diner, the necromancer tells Landon he is here because it is his own personal hell. He is shackled to the place. Landon tells him how he is stuck and trying to get back to the real world. The necromancer teases him, Hope probably has a new boyfriend. Landon starts to leave when the necromancer shows him the key to a door out of there. He cannot go through because he is shackled. They could make a deal to help one another.

As they head through the school on a tour, Hope sees memories with Landon all around. They wait for the regular students to arrive when only 4 return. This is all that is left, they tell Lizzie. Rick is arrived and is forced to tell Hope, Lizzie, and the others they lost everyone after the battle with the necromancer.

Jo runs into Dorian. He is the new principal at Mystic Falls. Back at the school, Hope and the others struggle to make the school look exciting.

Landon figures out what the necromancer needs to do to get free – humiliate himself in front of human debris. He sings and his shackles fall off. He then punches Landon after telling him he is wonderful.

The necromancer chains himself to Landon. Landon is his way out. Back at school, Alyssa tries to reach out to MG. He isn’t answering. In fact, he is focusing on himself and he doesn’t care what that does to anyone else.

Rick and Lizzie count up all of the students. They are two short. Maybe they can bring Jo back. Meanwhile, Hope is with the students on a tour. Her emotions seem to be too much as she remembers Landon. She knocks the group across the room. She looks around and discovers they are unconscious.

Rick and the others come to see what happened with Hope. She runs off. They need to get 2 of the students to sign when they come to.

Shackled together, the necromancer and Landon fight to get at an object that would help them escape.

Kaleb works to get one female student named Chloe to come to the school. She senses they are lying about something. Rick also has bad luck when his students is actually there to get revenge on him for killing some of his vampire family members. Lizzie gets too emotional to one student. Chloe finds Hope in the art room. They talk. Meanwhile. Rick has chained the student to the chair and is still trying to talk him into coming to the school.

Jo is sitting in the hall alone at lunch. Ethan comes and sits with her. He gets being new is proud tough as well as leaving a sibling behind. Back at the Salvadore School, Hope shares her fear and all her memories with Chloe. She shares how the school is home for her. Chloe decides she also wants that.

Landon and the necromancer fall through a door and they are right back in the diner. They figure out the freezer in the shop is the way out. They fight. Landon overpowers him. He jumps in the freezer.

Chloe signs up with Rick. Another student also decides she wants in. Joe talks to the girl she likes after acting weird all day.

That night, Lizzie brings MG ice cream. He is getting rid of the things that remind him of Alyssa. Lizzie is afraid Jo is going to forget about her. After she shares her feelings, MG tells her they have a bad dynamic. She only comes to him when she has run out of people.

Landon is still stuck in the prison world and is not going to give up.