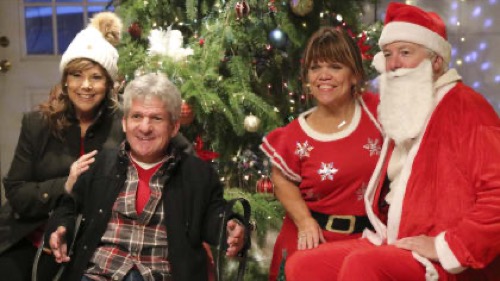 Amy is feeling the pressure of planning a wedding with little time and while undecided on the venue. Zach and Tori fear there will be endless drama if Amy and Chris get married at Roloff Farms.”

In tonight’s Little People, Big World episode, Lilah Ray turned one. The baby was still resisting wearing her glasses and so she didn’t wear them for most of the time on her birthday. However, she did get to spend her birthday with her family. Both sets of grandparents came and even the baby’s great-grandmother came in from out of town to celebrate. Lilah’s birthday couldn’t be as big as Jackson’s first birthday.

The coronavirus restricted how many could show up and so no extended family could be there only the people that did show made it special. Amy also announced her wedding date while she was there. She and Chris have chosen a wedding date and they were letting Matt know because Roloff farms were going to be their Plan B if their first venue fell through.

Amy and Chris didn’t want to use the family farm as their Plan A. They or better yet Amy was hesitant about using the farm because she no longer owns a stake in it and she also thought it would be weird to plan a wedding and have her ex-husband be a part of the equation. Amy’s son Zach and his wife Tori didn’t think her having the wedding at the farm was a good idea.

They liked how well Amy and Matt have been getting along and they didn’t want to risk that. They feared that Matt would place a flower pot wrong and that Amy would then accuse him of trying to destroy her wedding. They, therefore, wanted to preempt the fight they knew would naturally come. The couple was also thinking about their futures.

The farm manager KT was currently renting the farmhouse. She’s doing great things with the property and her rental contract is coming up and so now was the time for Zach and Tori to decide if they wanted to move onto the farm. Zach admitted to his father that he wanted to run the farm one day. Matt has been showing him what he does and Zach has been following his lead. Zach has also replaced his mother as Matt’s voice of reason sometimes.

Matt bought a train set. It was a large train set and he even purchased it with smoke for the Christmas season. If he had told his son he would be buying it, Zach would have done his best to talk him out of it. Zach would have said that the train set would only be used for one time of the year and that Matt would most likely have to stop it from rusting and if it did rust then he would have to build a new barn to house it.

Zach would have vetoed the train set. He knew it was going to be more work than it was worth and so he would have been the voice of reason with Matt. Matt didn’t want reason and that’s why he purchased it on the sly. Matt also didn’t see how Amy possibly having her wedding at the farm could be a bad idea.

Matt and Amy’s fiancé Chris have been talking. They share stock tips and they’ve become friends. They didn’t let Amy know they’ve become friends. Amy would have vetoed that. Amy told Chris not to be friends with Matt and he ended up doing so anyway. This is why he thought having the wedding at the farm was such a great idea. It would save them thousands of dollars and Chris thought there wouldn’t be a hassle.

He talked to Matt about doing a tour of the venue. He and Amy later went on a tour with Matt and Amy were so uncomfortable. She was sandwiched between both men on one of the mules as they drove to the barn and Chris found it funny while she did not. Chris also ran things past Matt which Amy didn’t appreciate.

Amy was uncomfortable. She said goodbye to the farmhouse after thirty years and she didn’t know if she could get ready there for her wedding to Chris. Chris and Amy also have different ideas about their wedding. She’s been married before and so she knows how to plan a wedding. It was Chris who was sorta looking at the wedding like one big party. He wanted air cannons and Amy shot that down because they would be too noisy during the ceremony and the reception.

One because they had vowed and the other because they had music that couldn’t nor shouldn’t be drowned out. Amy and Chris were invited by Matt to the family Christmas celebration. He was doing something fun for Jackson and Lilah and it was great that he included Amy and her family.

It was still a little awkward for Amy to be around Caryn. Only she admitted in her confessional that she was keeping quiet and buttoning up because the Christmas season was about the grandchildren. Not anything else. Amy and Chris showed up early to help set things up and they also tried out Matt’s chairs.

Matt often has a problem with finding comfortable chairs. He decided to build one for himself and he got the idea from Zach’s chair. Zach got a chair in high school that was just for him and it was the most comfortable chair Matt has ever sat on. He often has to sit on the edge of chairs or he was just downright uncomfortable in other chairs. His building something just for himself was a great idea. He was great at projects and he was also currently planning the layout of his new house.

Matt and Caryn plan on living together when the house is completed. In the meantime, she bought a house and she was going through some construction to get it right where she wanted it. Caryn and Matt later brought out the new train for the kids to enjoy and Jackson loved riding in it. They all rode in it. And they ended the year on a high.