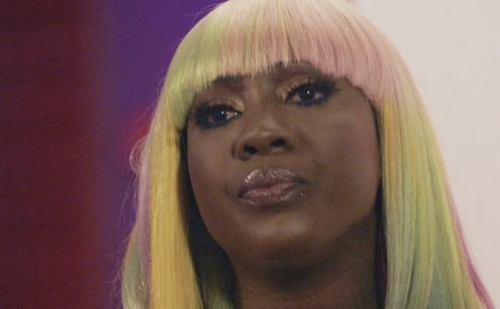 Tonight on VH1’s hit series Love & Hip Hop Atlanta returns with an all-new Monday, September 13, 2021, episode and we have your Love & Hip Hop Atlanta recap below for you.  In tonight’s season 10 episode 10, “Face The Music,” as per the VH1 synopsis, “Spice declares she’s single as she navigates her rocky relationship. Safaree takes the next step in his divorce from Erica, while Scrappy contends with rumors that Bambi has sought out her own divorce attorney. Tate takes her career into her own hands.”

In tonight’s LHHA episode, Spice is headed to New York to promote her new album. She cannot wait. She will be on Wendi Williams. Karlie arrives to see Spice to share gossip about Dubai. She talks about how her daughter’s boyfriend came and she cannot stand him. She wants him to leave her alone. Spice tells her to let her daughters make her own mistakes. Spice vents about Justin and how he wants to tone it down since they are together and she isn’t doing that.

Renni is with her trainer letting out her steam since fighting with her mom. She discusses how she can bring her kids on tour. She wants them to be with her more. She also wants to have new music for her tour.

Erica is in the hospital still. The baby is good. She feels strange being alone and married at the same time. Saf arrives home from Miami after being served divorce papers. He has no idea what is going on. Things are getting nasty. He goes to Scrappy’s house. Bam gives Saf an earful about how Erica is dilated and the baby isn’t even developed. Saf tries to defend himself but Bam is too mad.

Baby Tate and her friends go to the Pedal Pub. She needed to see her friends. She has been busy. She shares that she is thinking she might move to LA. Her friends are sad.

Tate shares that she isn’t too concerned over her man and leaving. She has opportunities coming her way and she is focused on that. They all toast.

Scrappy goes to see his mom. She shares stories about her time in Dubai. She cooks for him. She shares that Sierra told her Bam wants a divorce. Scrappy thinks she is all wrong. She is talking about Erica not Bam. He gets mad. He knows Bam wouldn’t do this behind his back. She would do it in his face.

Spice is in New York. She heads to iHeart Radio and then Wendi Williams. She shares during the interviews that she is single. Justin why she is in the city so he will have to deal with it.

Renni is at the club. She thanks all of her friends for coming to her listening party. Her mom is there. She hopes they can hash it out. They end up in a fight again when her mom plays the victim. They start screaming at one another in front of everyone. Renni goes after her mom. They cry and fight but then hug and make up.

Erica gets out of the hospital. She is so happy Bam has helped. Erica calls Deanne, her daughter’s godmother. She needs help. Saf has done nothing. She has had it. She would rather divorce him than be with him and alone. He has no respect, as he went to the club and let women dance and rub all over him.

Justin comes over to see Spice when she gets back. They get into an argument over her saying she is single. She isn’t. But she feels like she is because he took her photos down.